Jonathan Lane, trading director at grain group Gleadell, says the wheat harvest is just getting started with yields appearing average to just below.

“Anecdotally, yields will match the five-year average trend of around 8t/ha,” he adds. 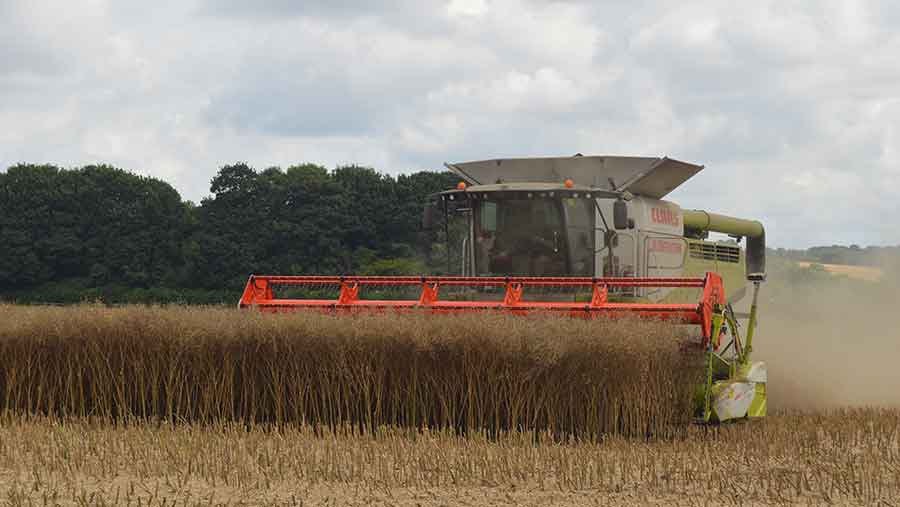 Milling wheat varieties are achieving between 12.3% and 13% protein, with Hagbergs over 250 and specific weights of 75-80kg/hl.

Feed compounders often look for barley of over a minimum specific weight of 63kg/hl, so many growers are suffering quality penalties.

Winter barley arriving at Woldgrain in Lincolnshire has improved in the past week, according to laboratory and haulage manager Dan Murphy.

There have been some anecdotal claims of deductions of £30/t for specific weights of 53kg/hl to 54kg/hl, he adds.

At the beginning of the week the store received 1,000t of high-oleic low-linolenic oilseed rape. Oil levels were a mixed bag, ranging from 40% to 47%, he says.

Some samples of rapeseed had ergot in them, which Mr Murphy suspects have come from grassweeds.

“We can clean it out but it is an added hassle and something growers might not have considered if they have a lot of grassweeds,” he adds.

However, in contrast to the South, winter barley further north is performing reasonably well, says Gary Bright, managing director at Grainco, which trades in northern England and Scotland.

He adds that winter barley is performing a lot better than further south with specific weights mostly above 64kg/hl, with 67-69kg/hl not unusual.

“The variety Volume seemed to suffer, but not uniformly, as we have seen some good samples. Bazooka is one that has done the best, at 69-70kg/hl,” he says.

Yields have been all over the place, and didn’t necessarily reflect the specific weights, adds Mr Bright.

“It’s very difficult to have a clear picture. You talk to one farmer and think it’s Armageddon; talk to another and it sounds quite good,” he says.

Oilseed rape harvest is just about to get started in earnest, with only two loads in so far to the grain group.

“One farmer was combining on Sunday in the high winds – he started out with good yields but by the time he finished the seed had all been blown out,” says Mr Bright.

Some wheat has been cut in Yorkshire, but the majority will not be under way until about 25 August.

“The wheat crops look okay – I’m not expecting any disasters, although it’s been quite expensive for farmers to keep on top of disease. It’s been a really unusual year – I think we’ve had more sun in the North than the South, which has been good for the crops,” says Mr Bright.