The wheat harvest is finally making rapid progress, with most milling crops meeting specification, although proteins are proving variable.

In east Kent, consistent sunny weather in the 10 days to 15 August means 80% of the wheat area is expected to be combined by the weekend. 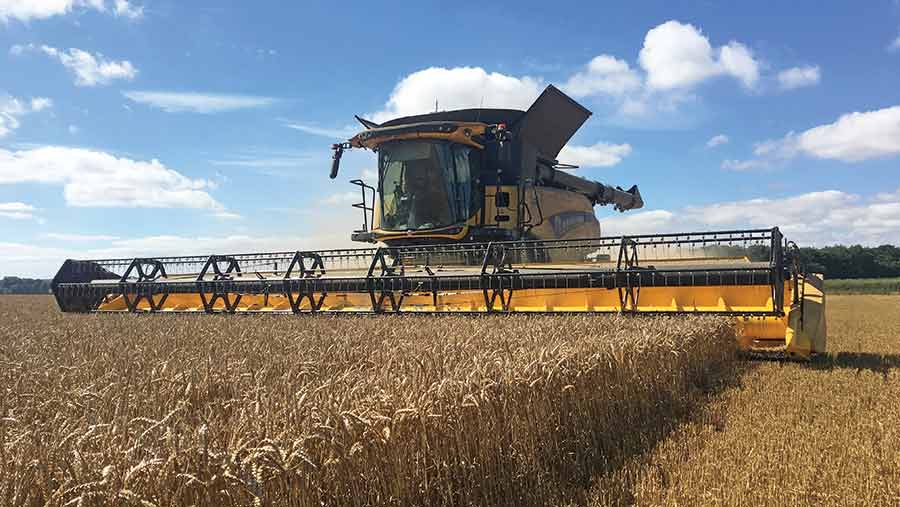 According to Hutchinsons agronomist James Short, it has been a dry harvest for most, although quality and yields have been extremely variable.

“Light land has done better than average, with some varieties performing better than others,” he says.

Skyfall and Crusoe have been promising, yielding more than 10t/ha on some farms, while Cordiale and Trinity have disappointed with low specific weights.

“Other crops that suffered from wet weather and poor sunlight in the grain-fill stage had lower yields of 9-9.5t/ha,” says Mr Short.

Milling quality has been variable, with some crops delivering very good protein contents and some poor, largely dependent on nitrogen applications.

“Farmers should be aware that mycotoxin levels could possibly be high this year, depending on whether a T3 or T4 fungicide was applied,” says Mr Short.

Although the forecast is more unsettled, Cambridgeshire has been experiencing some great harvesting weather, according to Rob Munro, managing director at Fengrain.

“Wheat quality has been very good, with proteins markedly higher than last year, although specific weights are lower.”

Yields look to be at the low end of the five-year average, and there have been traces of black tip, ergot and fusarium in the wheat and spring barley, but not enough to be of any concern, he adds.

He estimates about one-third of the wheat has been cut.

At Cannington Grain in Somerset, about 20,000t of wheat has arrived into store, with more expected in the week.

“It is coming in full pelt at about 2,000t/day,” says store manager John Collins. “It is looking quite well and we are finding the specific weights are quite heavy.”

At Kernow Grain in Cornwall, harvest is about a week behind, with 7,000t of wheat now delivered. Specific weights have averaged 76-78kg/hl at both stores, while milling wheat proteins have been a bit low.

“A lot has made milling quality and farmers are happy that crops have come off dry and quickly.”

In Wales, Geoff Thomas is due to start combining spring barley and winter wheat at Pantycoch Farm, Haverfordwest, this week.

So far he has cut all 14ha of his winter barley. Half of the crop was Bazooka, which yielded between 8.6t/ha and 9.3t/ha, with specific weights of 63-64kg/hl.

“It is the first time I have grown a hybrid and I am absolutely delighted with it,” says Mr Thomas. The rest of the winter barley was Infinity, which yielded more than 7.7t/ha and had a better specific weight of 65kg/hl.

Mr Thomas has also finished combining his 12ha of PT211 oilseed rape, which proved only adequate with a yield of 3.1t/ha.

“It is just the year and there is nothing you can do about it,” he says.

“The only good thing about rapeseed is that the price is going up and we had no drying expenses.”