Wheat quality looks good on early-harvested grain on one Cambridgeshire farm with yields looking likely to hit the farm’s long-term average of about 10t/ha.

Andrew Tetlow, partner at AWT Farming, says early winter wheat results show yields at 9t/ha with a specific weight averaging 77kg/hl, although no results for protein and hagberg were available. 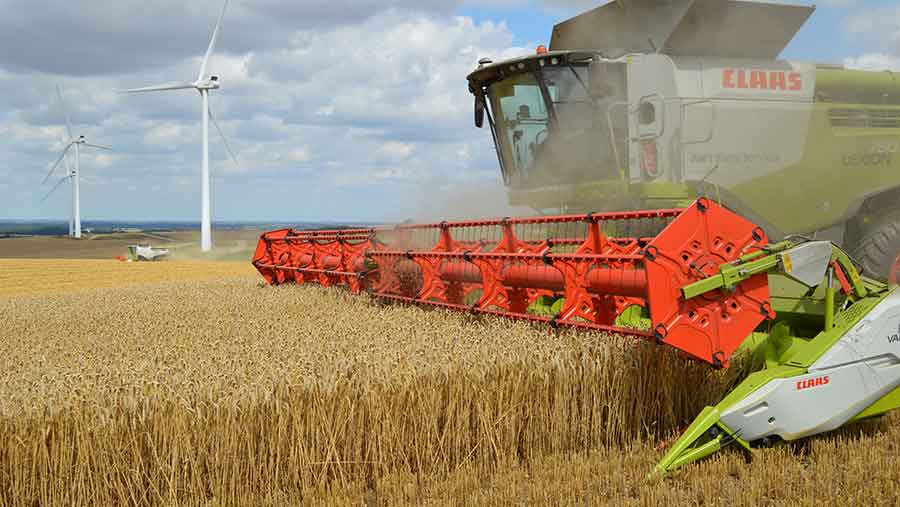 He has been cutting the milling variety Edgar, which is being grown on light land as a second wheat, but expects yields to rise as he moves on to heavier, more fertile, wheat land.

“It has been a slow start to harvest because of recent rain but it has also been quite an early start as well, and we are hoping for yields of about 10t/ha as we moved on to heavier land,” he tells Farmers Weekly.

The group has only cut a fraction of its 1,400ha of wheat comprising milling varieties Edgar, Skyfall and Crusoe, with the feed variety Diego also grown across the 2,000-plus hectares of land it farms in Cambridgeshire, Essex and Suffolk.

He started wheat harvest on Sunday 31 July, as compared with 5 August at Wadlow Farm, about eight miles east of Cambridge.

The oilseed rape harvest is complete with yields hit by flea beetle down at 2.5t/ha as compared to a farm average of 3.75t/ha across 116ha, while winter barley averaged about 8t/ha across 280ha in the first year of growing the crop.