Wheat harvest is nearing a close in parts of southern England, and although yields are slightly below average, grain stores are seeing high protein contents.

In Wiltshire, milling wheat proteins have averaged about 13%, although they have ranged from 7.2% to 14%, says Claire Young, laboratory manager at Wiltshire Grain.

Specific weights have generally been very good, although some crops have fallen as low as 68kg/hl. 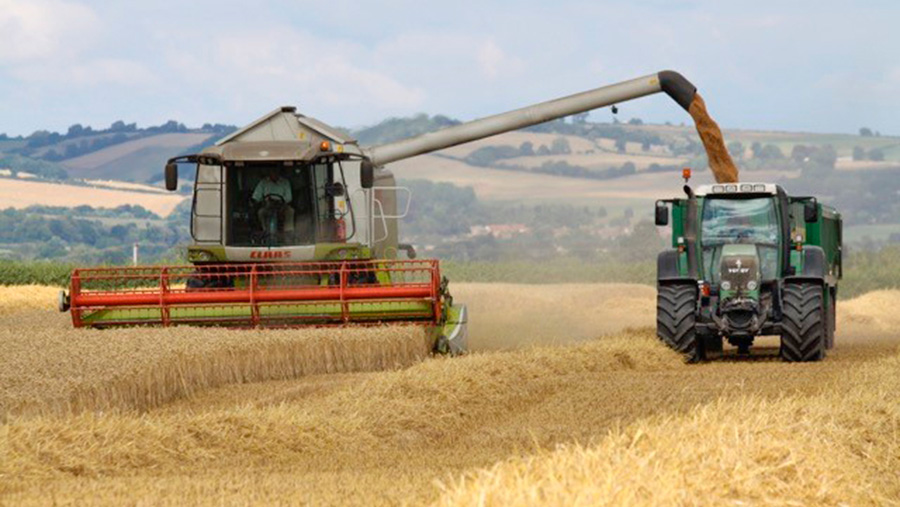 Spring barley quality is less good, with some quite bad skinning.

Any malting barley more than 15% skinned is likely to go as feed, she says.

Wheat harvest is the best part of 85-90% complete in Kent, with quality proving to be excellent across the county, says Robert Preston at GH Grain.

“Quality has been good with a few exceptions, but more farmers are happy than unhappy,” he says.

Yields have been lower than 2015 and subsequently proteins have been higher, with specific weights mostly about 77-78kg/hl.

“Spring beans are still a few weeks away but if the weather is fine all week, wheat might be finished by the bank holiday,” adds Mr Preston.

In Somerset, harvest is just about wrapped up for Richard Payne at Manor Farm, Taunton, with only the bean crop to finish off.

He has harvested a small amount of Tundra winter beans which have been disappointing, averaging 4.4t/ha, while his Wizard variety yielded 5.2t/ha.

Mr Payne has finished combining wheat with the second wheats yielding better than his first wheat.

Although his first wheat Crusoe made milling quality, it did not yield as much.

His winter barley has been very variable, ranging from just below 4t/ha to 9.4t/ha.

“It was really bad on the heavy ground that was wet through the winter and we could not get to it to apply an aphicide,” he says.

His 32ha of Glacier suffered from barley yellow dwarf virus but specific weights mostly came in alright, although poorer crops came in under 60kg/hl.

Mr Payne’s conventional oilseed rape outyielded his hybrid variety for the second year running. His crop of Trinity yielded almost 4t/ha, while 316OL averaged 3.7t/ha, with oils between 43% and 45%.

“We have not had to dry much and it has been a fairly easy harvest really,” he says.

In the north of England, harvest has been a stop-start affair due to rain showers, according to Gary Bright, managing director at GrainCo.

He says most growers are cutting their oilseed rape before it goes on the floor, and yields have been about 2.5t/ha to 3.1t/ha, and most oil contents are about 44%.

“Ironically, some farmers are cutting wheat before the rapeseed is ready, but the wheat combining has really only just begun,” he adds.

Several thousand tonnes of wheat have been delivered to the store, with generally good quality, although some protein contents are quite low, downgrading the wheat to feed.

“If proteins are around 11.5% to 12% then the deductions mean the milling wheat is selling for less than feed in some areas,” says Mr Bright.

Barley has performed better in the North than the South.

About  80% of deliveries have had good specific weights, while yields have been very variable, with some crops achieving 6.2t/ha and others 8.6t/ha, he adds.

“Specific weights have been fine; generally between 60kg/hl and 68kg/hl, with the odd exception where crops have been diseased,” he says.