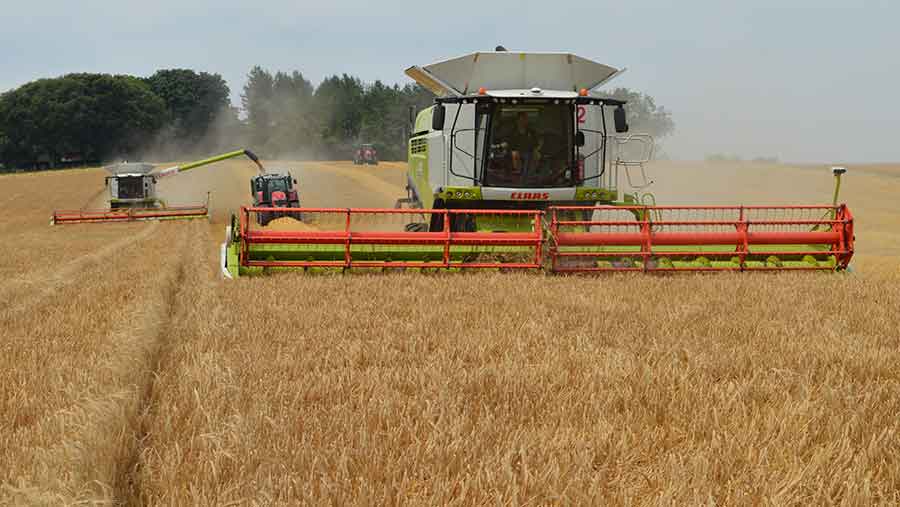 The winter barley harvest on one large Lincolnshire arable estate has turned disappointing with yields down 20% on the farm’s five-year average.

After a promising start with early yields above 8t/ha, overall yields across the estate’s 395ha of winter barley has showed average gross yields of 6.5t/ha, with specific weights down at 53-60kg/hl.

The barley harvest kicked off on 20 July at the Sir Richard Sutton Estate in Lincolnshrie which includes light land on the northern Wolds and heavier land towards the River Humber. The area is divided between the varieties Glacier and the six-row Volume.

The oilseed rape harvest is 30% complete with the only variety cut being Extrovert with a gross yield of 3.5t/ha and oil contents of 44.5-47%, says head of farming Chris Baylis.

The winter barley harvest on the group’s Berkshire Estate has fared better than on the Lincolnshire Estate, which is based at Hall Farm, Stainton le Vale, near Market Rasen, and covers about 2,600ha of arable cropping.

Winter barley yields on the Benham Estate, just west of Newbury, have been just over 7.5t/ha with specific weights of 60-65kg/hl. The majority of the grain is over the 63kg/hl requirement for feed compounders.

The oilseed rape harvest is further ahead in Berkshire being 60% complete but after variable establishment last autumn and flea beetle damage, yields were 20% below the farm’s five-year average and hovering a little over 3t/ha with oil contents at 44-46%.

No winter wheat or spring barley has been cut on either of the two estates.