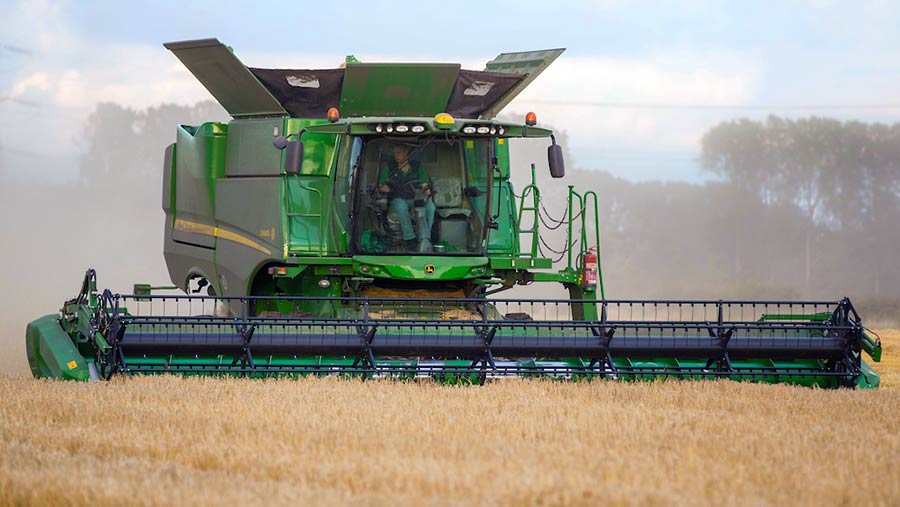 A much-needed heatwave over the bank holiday weekend got combines started again, as growers desperately look to cut crops before the wet weather inflicts further damage to grain quality.

In Cambridgeshire, the majority of wheat had been cut and about a quarter of the spring barley remained in the field.

“Spring barley yields have been reasonable,” explained Guy Palmer, managing director at Dalmark Grain. “However, there has been the odd report of germination in later cut crops.”

In addition, any wheat cut over the past 10 days would only be fit for feed markets. “The past 10 days have seen Hagbergs drop right off – anything cut before then was actually quite high in quality,” he added.

“We have had a week without rain and so the vast majority of harvesting is done. As long as the weather holds out, by the end of the week everything should be cut.”

With the north-east having enjoyed better weather than other parts of the country, yields were also better than expected.

“Growers were a bit nervous about oilseed rape and barley at the beginning of the season,” said Mr Bright.

“While yields are not record-breaking, they appear to be about 20% higher than estimated – most growers are very pleased.”

In southern England, harvest was complete at Travellers Rest Farm, near Blandford, Dorset. “We finished harvest on Monday (28 August) and I am very pleased with the results,” said George Hosford.

Results were a bit more disappointing on 127ha of spring barley, though quality was better than anticipated.

“I thought the quality would be poor as the crop looked dreadful in the field, but nitrogen and germination levels have been good,” said Mr Hosford.

“It is apparent that the hot spell in June had a negative impact on yield in places. That said, yields, in general, are so far significantly better than the 2016 crop.”

Pea yields varied from as low as 2t/ha up to 6t/ha – with early harvest peas looking to have fared the best – while bean yields so far averaged about 5t/ha.