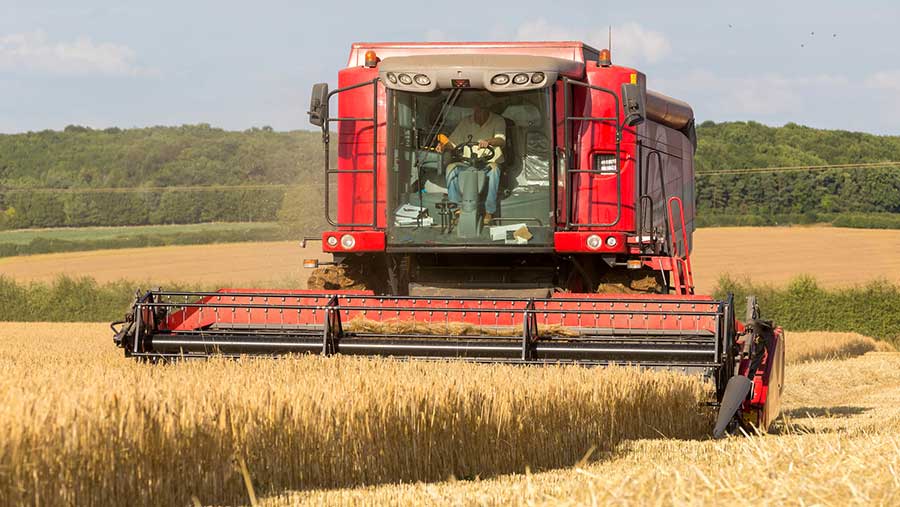 Harvest 2017 has begun weeks ahead of normal for some growers on light land as last week’s heatwave pushed drought-stressed winter barley crops to their end.

Berkshire grower Colin Rayner said he was cutting winter barley on gravelly land a whole 18 days earlier than during the 2016 harvest. He added the last time he started combining barley in June was in 2009.

Some winter barley is now also being cut in Suffolk and crimped in Wales for livestock feed.

Meanwhile, oilseed rape crops are being desiccated in Cambridgeshire, Lincolnshire and Nottinghamshire, which means harvest is set to kick off about mid-July.

The vining pea is well under way, with Lincolnshire-based Fen Peas saying they are now 30% through their 2017 crop. Early potatoes are also being lifted in Suffolk, while rye is being cut over the border into Norfolk.

We’ve harvested 14 tweets to give you a flavour of what’s happening out in the fields as the most exciting part of arable farming gets cracking.

You can stay up to date with all the latest harvest 2017 developments by following Farmers Weekly’s Harvest Live Twitter account, liking the Harvest Live Facebook page and you can get all the news and analysis on the harvest page of the Farmers Weekly website.

Be sure to send us your photos via social media, by emailing the arable team at fwarable@rbi.co.uk or by uploading your photos to our dedicated Harvest 2017 gallery.

As always, we will try our best to feature as many of your photos and videos as possible online and in the magazine.

However, in the West, agronomist Richard Alcock says this crop of Crusoe looks promising with plenty of fat grains waiting to turn a golden brown colour.

Rapeseed getting it this morning. #harvest17 pic.twitter.com/EVZBosiyp1

#harvest17 is underway with the first vining peas coming off, keep up @peamanruss! pic.twitter.com/IZ4yiqLd7b

Winter Barley really moved on in the week I've been away! Best get 2nd cut in so we can take the trailers apart!#harvest17 pic.twitter.com/4JZEGDrOID