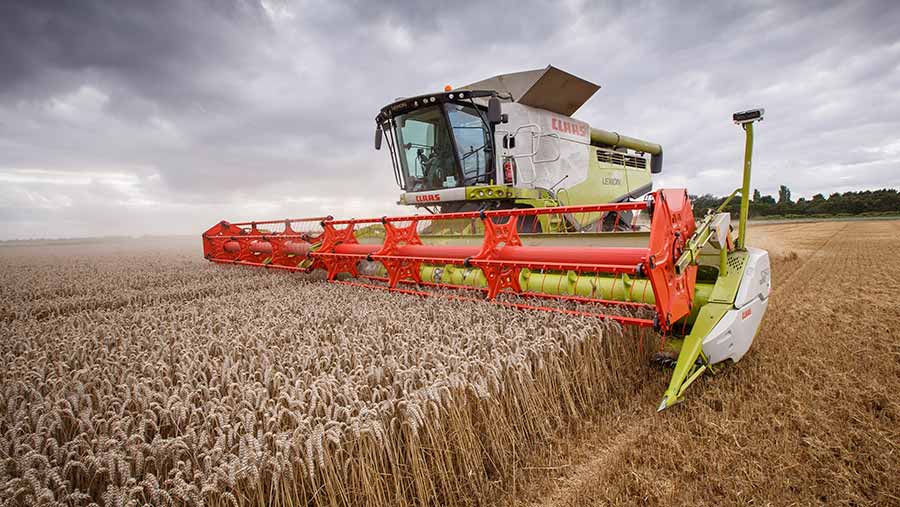 Concern is growing over the milling wheat harvest as grain quality is dipping in a stop-go harvest with many idle combines waiting for rain showers to pass.

Grain buyers advise milling wheat growers to cut if grain moisture dips below 20% to try and ensure they hit the specifications millers need.

He is now cutting spring barley as this crop has dried out quicker than the winter wheat at Watersplace Farm, Wareside, near Hertford.

“Hopefully, we will get into the wheat by the end of the week once the moisture levels have started to fall,” he said.

Down in Kent, farm manager Trevor Pierce has cut one field of the new milling variety Zyatt on 28 July, which yielded a pleasing 11.5t/ha with a good specific weights at 79-80kg/hl.

He is hopeful it will reach milling quality but is concerned the high yield could have caused protein dilution on the 1,000ha of medium clay loam land he manages for R Sternberg Farms.

He is heading into the Skyfall next as there are fears the awned heads of the popular milling variety could sprout ahead of other types, although the straw is not fully ready.

Having finished Tythe Farm’s oilseed rape and winter barley 10 days previously, he started on a field of Lili only a few days after it was ready, with 50ha cut and 150ha remaining.

He said it has been yielding between 8.5-9.5t/ha at a specific weight of about 75kg/hl, which was an improvement on last year but in line with the farm’s five-year average yield.

Hitting milling proteins of 13% can be a challenge, which is why his strategy is to grow the variety as a feed wheat and treat any milling premium as a bonus.

“It was at 19% moisture when we started cutting and only dropped to 16% by the end, but we have a big drying capacity and I’d rather see it in the shed,” said Mr Stokes.

If he gets the chance to drill into moisture he may get some oilseed rape established next week to try and get the crop well established ahead of any potential damage from cabbage stem flea beetles.

Start made in Oxfordshire

Over in south Oxfordshire, farm manager Simon Beddows is just making a start on his 320ha of wheat, cutting 20ha of Skyfall at 17-18% moisture.

The crop was yielding 7.4t/ha on some light gravel land when he was looking more for 8t/ha at Dunsden Green Farm, just north of Reading.

“The cold spring obviously had an impact as did the hot weather in late June,” he said.

Other crops on the farm held up well with 100ha of winter barley yielding 8t/ha and a similar amount of oilseed rape managing 3.3t/ha.

In south Lincolnshire, James Ireland is busy cutting 120ha of spring barley waiting for his winter wheat to dry out at Grange Farm, near Sleaford.

The malting variety Planet was yielding 7t/ha on his light heathland but he was concerned at low specific weights at just 62-63kg/hl and high screenings, but nitrogen levels were well within the maltsters needs at 1.5%.

“Considering the dry weather we had in the spring we are reasonably happy with the result,” he said.

Combines are busy in Kent and East Anglia in between the showers, but he is more concerned about the area from the Midlands down to Hampshire which has seen more rain.

Next week could be critical for the milling wheat crop, with mixed weather seen this week, said Andrew Hill at agronomy and grain trading group Frontier.

“Before this week, the quality was good and better than last year, but this week we are seeing lower Hagbergs,” said Mr Hill, who is grain originator team leader at the group.

In a protracted and frustrating harvest, some wheat has been cut in the south east of England up to south Lincolnshire, but much north of there is still green and not ready for harvest.

Traditional wheat industry minimum milling standards are for grain protein of 13%, specific weight of 76kg/hl and Hagberg level of 250.

Early barley in the North

Up in Northumberland, Will Armstrong, partner at Greenhill Farm, kicked off the earliest winter barley harvest in 50 years on 20 July but then switched to oilseed rape after showers threatened to strip the crop.

The rapeseed is now in the shed and will have to take the five-mile trip to Coastal Grains before yield can be confirmed but he expects it to be in line with the farm’s five-year average of 3.5-4t/ha.

The farm’s 90ha of oilseed rape is all Clearfield varieties as charlock is the primary weed threat on Mr Armstrong’s 400ha of cropping, which runs from sandy land near the coast into heavy clays further inland.

Although rain has put a hold on cutting the last 50ha of barley he hopes to get that out of the way before heading into the winter oats and then having a clear run at the 190ha of wheat.