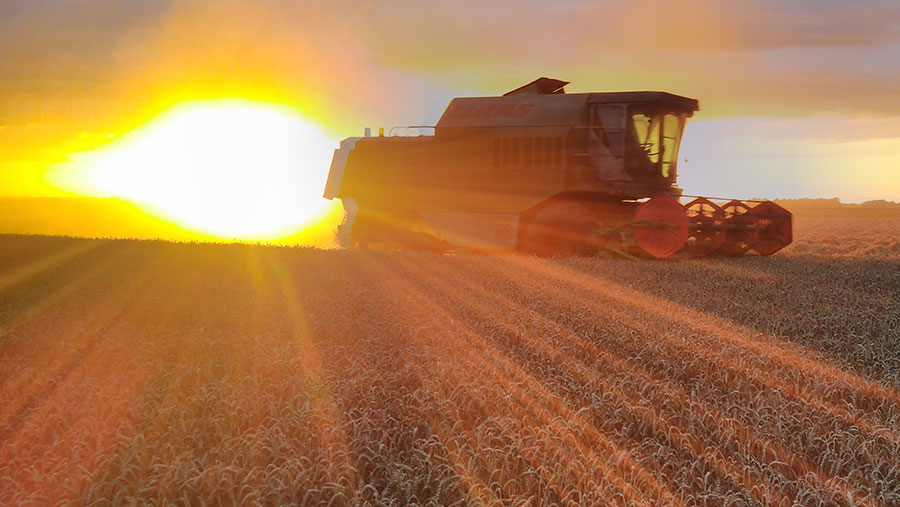 Class Dominator combining at sunset posted to gallery by ppb

Grain is now coming into stores wet as growers are no longer waiting for dry spells because of concerns that quality is starting to be affected.

Winter barley harvesting is almost complete in Scotland, with specific weights, as expected, at about 63kg/hl, according to Scotgrain’s Trevor Harriman. The spring barley harvest is not yet started, but oilseed rape crops are ready to go.

“Farmers are reasonably happy with yields, but there is not a huge amount done so far. If the weather would dry out over the next three days, a good amount would get done,” added Mr Harriman.

Despite sharp, heavy showers over the past few days hampering progress, harvest was still about a week ahead of normal.

In Lincolnshire, the Woldgrain store had suddenly gotten busy, according to laboratory and haulage manager Dan Murphy.

“We had a wet couple of weeks and now everything is ready at the same time,” he said.

The store was receiving the last of the oilseed rape, with the start of the spring barley and Group 1 milling winter wheats coming in together.

Quality had been variable in the spring barley, with higher-than-average grain nitrogen levels.

“We have had to segregate each variety – Planet and Propino – three ways; into low, medium and high nitrogen content. A unique situation that is logistically challenging and may mean maltsters have to move their goalposts,” explained Mr Murphy.

So far only Skyfall and Crusoe of the Group 1 milling wheats have arrived at the store, with protein levels average to good, but hagbergs were falling away after the third consecutive week of rain.

“Skyfall that arrived on Monday had good bushel weights, with protein levels at more than 13%, but hagbergs were struggling to get over 180,” he said.

In Gloucestershire, harvest was proving to be a mixed bag, said Jeff Russell at Western Arable Services. Wet weather was dominating the situation, with growers trying to grab crops off the field whenever they could.

Wheat quality was looking good, with proteins very high, at more than 13% and hagbergs holding up well. Moisture levels were about 16-17%.

Colin Keevil at Chapel Farm, West Knoyle, Wiltshire, has done well with his oilseed rape crop, achieving 3.7t/ha across his 87ha of the variety Incentive.

Mr Keevil’s 202ha wheat crop was all ready to come off the field. “It is looking pretty good and is all stood up as it has just ripened, but we do need a dry spell,” he added.

Harvest had stopped according to David Sheppard at Gleadell. Wheat crops that have arrived at Gleadell stores had good quality and yields before the rain.

“It is a catchy harvest with some sprouting issues further south and quality is likely to deteriorate,” he said.

Spring barley was coming in below expectations, with reports of variable nitrogen levels, but there was still a lot due to come into stores.

“Most of the spring barley is currently in the fields, getting soaked,” added Mr Sheppard.