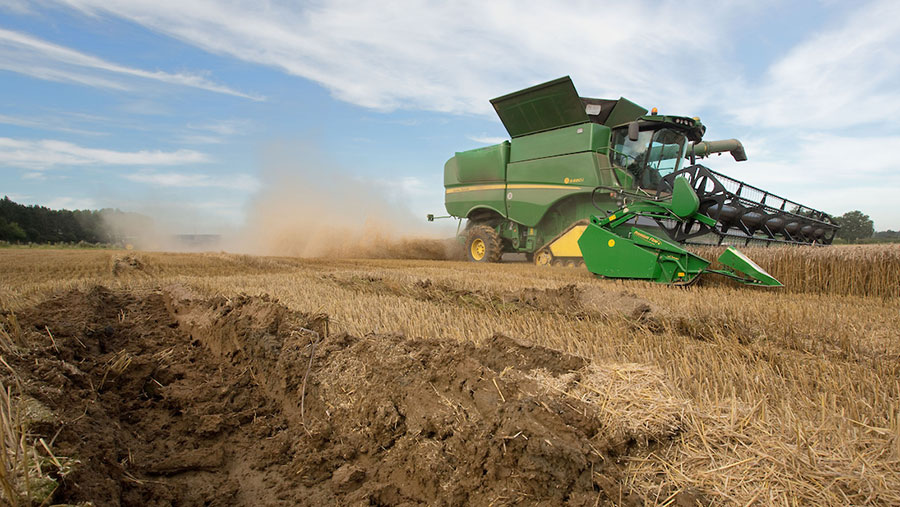 Heavy rain continues to hamper combining across the country, with farmers cutting at increasingly high moisture contents just to get the crops in the barn.

Exalte oilseed rape was a bit disappointing at 4.4t/ha, and Mr Grant-Suttie was itching to get on with drilling next year’s crop.

“It’s too wet though; we can barely get straw bales off the fields,” he said. “We’ve also got all the spring barley to cut, which is seven to 10 days away.”

Further south, the winter wheat harvest was drawing to a close at Hurn Hall Farm, Holbeach, Lincolnshire, with 83% (202ha) of the crop now cut.

“Gravity has done particularly well, whereas Skyfall has not performed quite so well,” said farmer Mark Tinsley.

He also had 45ha of Planet spring barley fit to cut, however, rain had stopped play. “The crop was drilled relatively late – if we achieve 7.5t/ha it will have done reasonably well.”

Over in Wales, Geoff Thomas had cut all of his oilseed rape and winter barley at Pantycoch Farm, Letterston, Haverfordwest, and was pleased with the results.

“We had just under 10ha of oilseed rape which yielded about 4t/ha,” he said.

The Belfry winter barley achieved 7.4-8.6t/ha. “With most six-rows, I would have my heart in my mouth, but it looks a damn good sample – so I am quite happy with that.”

The Propino spring barley was a week to 10 days off, with the crop still looking green. “It is full of potential so I am feeling relatively positive.”

In Berkshire, Richard Brown was delighted with his spring oats at Priors Farm, Peasemore, Newbury, although spring barley was slightly disappointing.

“We’re in our first year of organic conversion, and the Canyon and Rozmar oats averaged 5.4t/ha.”

“That was a bit disappointing, but it produced a lovely sample,” he said. “It was very aggressive and did a good job of suppressing the weeds, but it brackled so we lost too many heads.”

Mr Brown has 20ha of Propino spring barley left to cut, as well as contract combining spring barley and winter wheat. “Nothing is fit now so we’re just busy baling between the showers.”

Further south, contractor John Moss had about a week’s combining left to do near Saltash, Cornwall – providing the weather held.

“The fields are so mucky it’s like mid-winter,” he said. Yields had been all over the place, with winter wheat particularly disappointing as it had looked so well all year.

“It’s generally closer to 7.4t/ha than 9.9t/ha, and some varieties such as Skyfall are sprouting already.”

Winter barley was poor, at about 6.2t/ha, but spring barley and winter oats had done well, with Mascani oats 0.6t/ha above the farm average at 6.9t/ha – a yield matched by Planet barley.

“The other bright spot was oilseed rape – our Aquila averaged 4.2t/ha compared with a usual average of 3.7t/ha,” he noted.