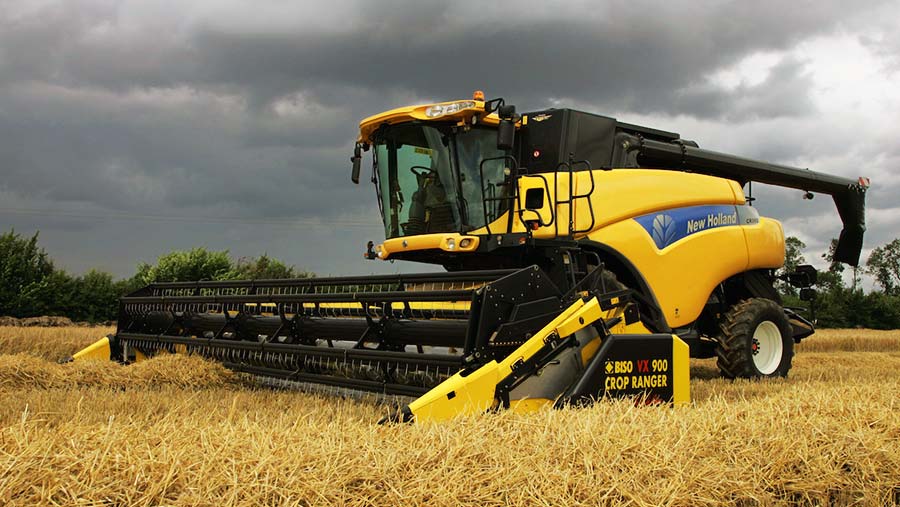 Spring barley and wheat yields are looking increasingly variable as harvest draws on, with wet weather damaging quality across the country.

In Shropshire, harvest has finished for grower Bruce Udale at Eyton House Farm near Telford, with Charger oilseed rape yielding just above average at 4.2-4.7t/ha.

In contrast, winter wheat yields have not been as positive – largely due to the dry spring, says Mr Udale. “I am not expecting much over 8t/ha – our average on a good year is usually around 9.4t/ha.”

Moisture levels have also been variable, ranging between 18-22%. However, specific weights have been surprisingly good, with Costello and Grafton hitting around 80kg/hl.

Up in Scotland, Cordiale winter wheat is performing well at Sweethope, near Kelso, and grower Stuart Fuller-Shapcott is pleased with the wheat harvest so far.

“Yields have been around 9.9t/ha, however, we also had some flat crops, which caused yields to drop to around 8.4t/ha,” he says.

The farm’s 81ha of spring barley was yet to meet the combine but Mr Fuller-Shapcott says this is on heavier ground and does not look as if it will be anything too special this year.

Over in Northern Ireland, rain has severely disrupted harvest, with 80ml falling on Tuesday (22 August) at Broglasgow House Farm, Myroe.

Grower Richard Kane has finished harvesting 81ha of Infinity winter barley and says moisture levels have been “stupidly high”, cutting at anywhere between 20% and 25%, with average yields of 7.5t/ha.

The winter wheat harvest is under way, with 44.5ha of Reflection and Diego now cut. “Despite suffering with yellow rust early in the season, Reflection has done OK,” says Mr Kane.

However, lodging had become a severe problem on the 49ha of spring barley, with most of the crop now lodged and at least another week before harvest is expected to get going again.

“Propino and Planet spring barley is finished and yields over 320ha have been incredibly variable. Dry weight over a weighbridge, we have seen anything from 7.8t/ha down to 4t/ha,” he adds.

Screenings and nitrogen levels were high, but germination was surprisingly good. Winter wheat is looking more positive with 260ha of Siskin and Diego left to cut.

Specific weights are averaging about 73kg/hl, with moisture around 17%, but yields are all over the place, notes Mr Merry.

The farm usually averages around 9t/ha on winter wheat, but this year wheat yields are anything from 6.5t/ha to 11.4t/ha.

“Most of the winter wheat has now been cut, and bearing in mind how much it suffered with the weather, yields have been fairly good,” says grower Robert Shove.

Second wheat Skyfall is averaging 8t/ha, however, quality is poor. Mr Shove says specific weights and Hagbergs – which is a measure of gluten quality – are disappointing for Skyfall.

However, for first wheat Crusoe, quality seems to be holding up and the biggest issue was the crop maturing before Mr Shove was able to cut.