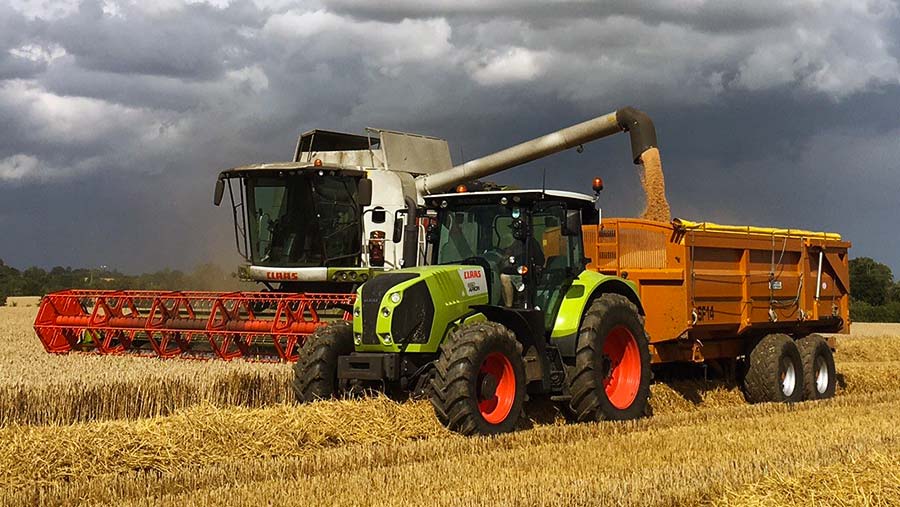 Harvest is drawing to a close across much of England and while Scotland’s growers are enjoying good results, poor quality and flash flooding are causing devastating losses elsewhere.

Oilseed rape and winter barley harvesting has been completed at Muirden Farm, Turriff, Aberdeenshire, with 526ha of wheat still to meet the combine.

“It has been a very stop-start season, but the results have been quite pleasing,” says farm manager Sandy Norrie.

OSR yields averaged 4.9t/ha across 526ha and oil contents were very high, helped by sulphur applied to the crop. The variety Flamingo has performed the best, with yields peaking at 5.7t/ha.

Unlike many other areas of the UK, rain has not massively affected harvest and the forthcoming wheat crop is anticipated to be satisfactory.

“This year we have grown Barrel and Monroe, and both are looking well – particularly the Barrel,” notes Mr Norrie.

For farmers in Northern Ireland, it was a very different picture – with many suffering huge losses from the recent flash flooding, says grower Robert Craig, whose farm had 52mm of rain on 24 August.

“While we have been lucky to not be massively affected, one farmer had 2.4ha of straw washed into the village and many others have waterlogging issues in maize and potatoes,” explains Mr Craig.

At Carse Hall Farm, Ballykelly, rain has delayed baling, with 28ha of winter barley still lying wet in the field – despite being cut on 10 August.

“We cut late as our crop goes for seed, but I have only managed to get 16ha baled. Yields have been slightly down with Surge and Cassia averaging 9.2t/ha and 8.9t/ha, respectively,” says Mr Craig.

Cutting of the 28ha of spring barley was still a fortnight away, and Mr Craig reckons 40% of this is now lodged.

At South Farm, Spetisbury, Dorset, the only bright side of harvest being completed was the yield, as wheat has struggled to hit milling quality, says farmer Clive Tory.

“As a milling wheat grower, this year has been catastrophic. Yields have been good, at 10.3t/ha, but we have only had one load that has met milling specification.”

Specific weights were down, at 75kg/hl, compared with an over-year average of 86kg/hl, and Hagbergs on the variety Skyfall ranged between 240 and 150secs, he added.

“Yields have been slightly below usual – but better than expected,” he says. “Overall, we have averaged about 11t/ha.”

He grew varieties Graham, Evolution and Motown, with the Graham grown on good land performing the best, at 12t/ha.

Quality has also been good, with specific weights between 73kg/hl and 76kg/hl. Mr Hoyles finished cutting on 16 August, meaning he missed the later poor weather.

Despite missing the rain, extreme weather has still been an issue this year, he notes.

“In the first week of July we had temperatures in the mid 30s – this killed the crop and so it lost a lot of yield potential.”

Yields were also down at New House Farm, North Weald, Essex. First wheat yields have been down by about 5-10%, compared with a normal year, explains grower Andrew Kerr.

Yields averaged 7.8t/ha, with Reflection performing the best. Second and third wheat quality has been disappointing, although first wheat bushel weights were better, at 77-78kg/hl, he says.