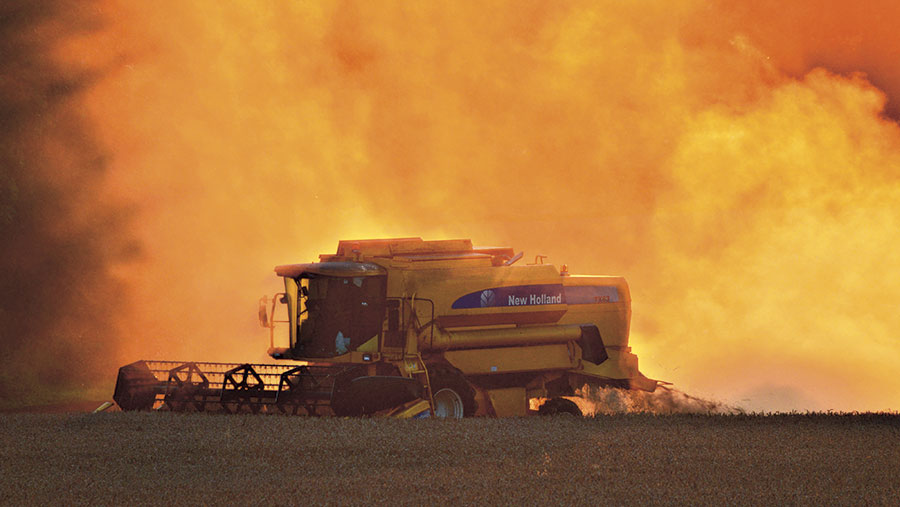 Harvest in southern England is heading into its final two weeks, although rain continues to halt combines across the country with potentially damaging results.

Stuart Attridge at Harlow Agricultural Merchants said growers in the East were on the home straight. “If we have a clear week this week, we will be pretty much done.”

Despite early positive indications in Essex and Hertfordshire, wet weather over the weekend had really dragged down wheat quality, said Mr Attridge.

“We have seen Hagbergs falling, sprouted grain and bushel weights slipping to below 70kg/hl.”

Some milling wheat had held up very well and first wheat yields had been fantastic, although second wheats were disappointing.

“There was initial concern over Skyfall due to its ability to trap moisture in the ear of the crop, but it has come through reasonably well,” said Mr Attridge.

“Overall, farmers are very happy with the yields, but slightly disappointed in the quality – especially with crops that have been cut later.”

Heading west into Shropshire, activity was much slower due to the wet weather, and concerns over wheat quality were growing, said Stuart Dolphin at Grainlink.

“We are starting to see Hagberg numbers reduce. Crusoe seems to be holding up well – though yields are variable – but in Skyfall and Illustrious Hagberg numbers have fallen below 200.”

Weather remained the predominant issue in the area, with most grain needing to be dried. “Everything is ready to cut, it is just a case of being able to get going,” he added.

“Many growers are now concerned they won’t be able to get the spring barley heads off the floor after a lot was flattened by the heavy rain.”

“We have grown 14ha of Glacier, and it has done very well. Grain has come off fairly dry at 14-16% and specific weight has averaged 69kg/ha.”

Focus was shifting to the winter wheat harvest, with 11ha of Gator now cut. “Quality looks okay, with specific weights at about 72kg/ha, but yields are poor,” said Mr Dowson.

“I have previously grown it and really like it as a second wheat. However, the dry spell in May seems to have really affected the crop – it is very disappointing.”

Further north in Perthshire, the winter barley harvest was now complete and stores were beginning to see the first signs of spring barley, said Robin Barron, general manager at East of Scotland Farmers.

“We have had 5,000t of winter barley and some of the winter malting barley has been very good. Nitrogen levels were about 1.71% and yields were more than 7.7t/ha – everyone is happy.”

Though spring barley harvest had begun, 25mm of rain in 24 hours had brought activity to a halt. “While there is a lot of uncertainty, we are reasonably pleased with the initial indicators,” added Mr Barron.

“Nitrogen levels look slightly higher than last year, but they are still okay – farmers are having to work in between showers, so we’re still in the very early stages.”