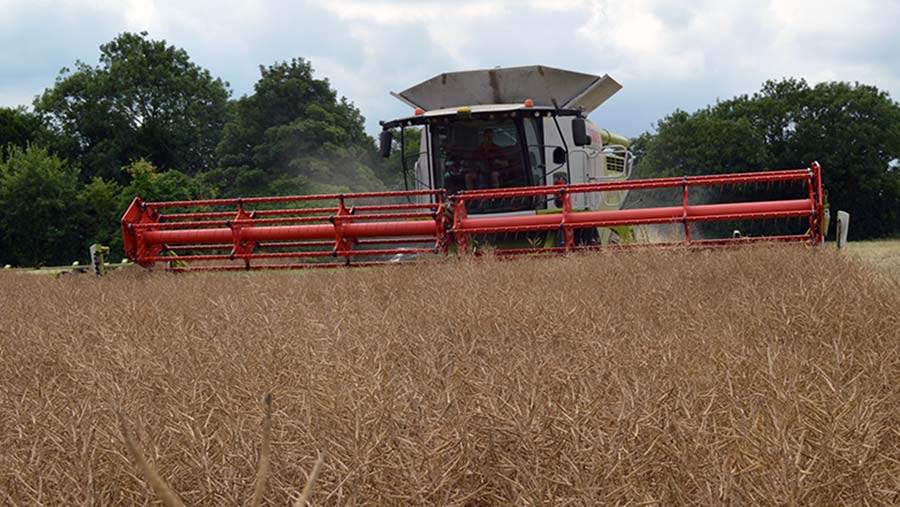 Early oilseed rape yields from one farm in East Kent are coming in better than expected after a dry growing season in the farm’s earliest-ever harvest.

James Loder-Symonds reports that yields are gradually rising up to 3.8t/ha as his combine moves on to crops grown on more fertile land of the 300ha of rapeseed he has to harvest.

“On our better land, the variety Flamingo is yielding 3.8t/ha, which is better than expected after dry weather at establishment and then early spring,” he tells Farmers Weekly.

Watch the full video report on the oilseed rape harvest at Nonington Farms below.

The oilseed rape harvest started on Thursday July 6 on Nonington Farms, between Canterbury and Dover, which was 10 days earlier than in a more normal season.

Mr Loder-Symonds is director of the farm group, which grows 1,200ha of combinable crops from its base in the village of Goodnestone, farming soils ranging from brickearth clays to chalky soils on the edge of the North Downs.

His combine’s first foray into the rapeseed crop was a field of Flamingo on some very light soil drilled late in the second half of August.

“This produced a disappointing yield of 3.2t/ha, but yields have climbed as we have moved into crops on better soils,” he added.

The better-yielding Flamingo at 3.8t/ha was sown on 10 August along with some Picto, which yielded 3.75t/ha, put against a farm average yield of 3.5-4.0t/ha.

These higher-yielding crops did better than expected largely due to the earlier drilling, which allowed the crop to establish better in a dry autumn, and grow away from pests such as cabbage stem flea beetle and pigeons in the wooded Kent countryside.

Given the lack of rain in August through to mid-September and then in the early spring, he is reasonably pleased with the yields so far.

The 300ha rapeseed area is made up of 40% Picto and then three other varieties – Elgar, Flamingo and Extrovert.

The farm’s smaller 50ha area of winter barley was all cut by 6 July, with the hybrid six-row Bazooka showing a better-than-normal yield of 8.9t/ha and a good specific weight of 69kg/hl, while two-row conventional variety Cassia managed an “average” crop of just under 8t/ha.

Mr Loder-Symonds pointed out the Bazooka appeared to cope better with the dry weather and showed good standing ability.