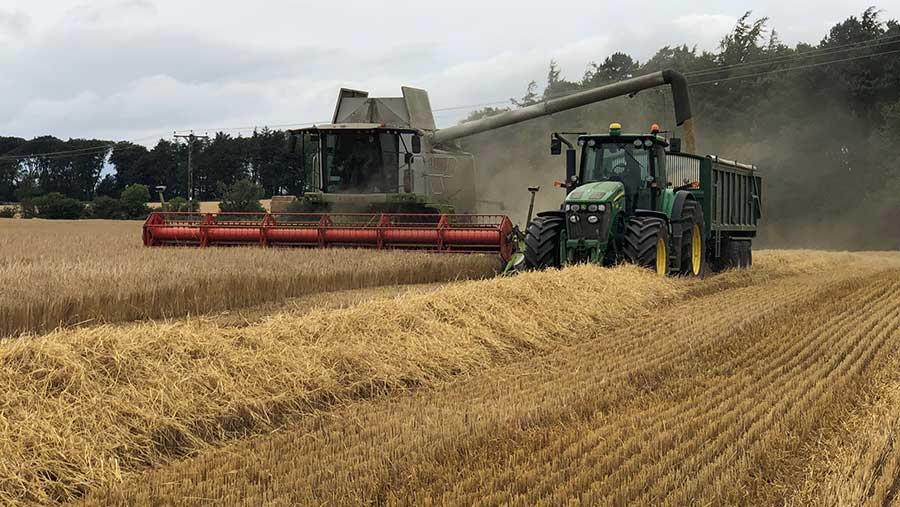 Harvest is continuing apace, with farmers across southern counties moving into spring crops while in northern areas winter wheat crops are reportedly ripe and ready to harvest.

Yields may have suffered in the summer drought but quality looks good, with milling crops meeting specification.

“It’s been very straightforward this year after last year’s rainy season,” he said.

“Bushel weight was quite a lot better than last year – but the grains are smaller,” Mr Gillbard said.

Focus is now shifting to spring oat harvest, with 17ha of Aspen in the ground, although he has some concerns about their performance. “The oats look very short,” he said. “Hardly up to my knees.”

“Yields have been very dependent on the soil type – brash is the worst followed by clay, while loams were the best,” he said.

“Yields are way below the farm average but better than we thought with the drought.”

Mr Stafford hopes to move on to Laureate spring barley next. “It has lodged a bit and is leaning due to the weather, but it does look really good.”

“It’s all quite positive – yields and prices are good,” he said.

Attention is now turning to the 526ha of Grafton, Graham and Motown wheat, as well as 200ha of oilseed rape which is likely to be cut 10 days earlier than normal.

“I’ve got no concerns over the oilseed rape and wheat: they both look good,” Mr Tuer said. “The sun is fantastic for the crops.”

Guy Davies has finished cutting oilseed rape at Red House farm, Shrewsbury, with 300ha of Incentive and Elgar yielding below average at 4.7t/ha.

Winter wheat harvest is partially complete, with 250ha out of 700ha in the barn, at yields between 7.2t/ha and 10.2t/ha.
“All of the Skyfall met the milling standard with Hagbergs at 400 and specific weight at 78-79kg/hl,” Mr Davies said.

“We wouldn’t normally start wheat until 9-10 August but this year we’ll be finished by then.”