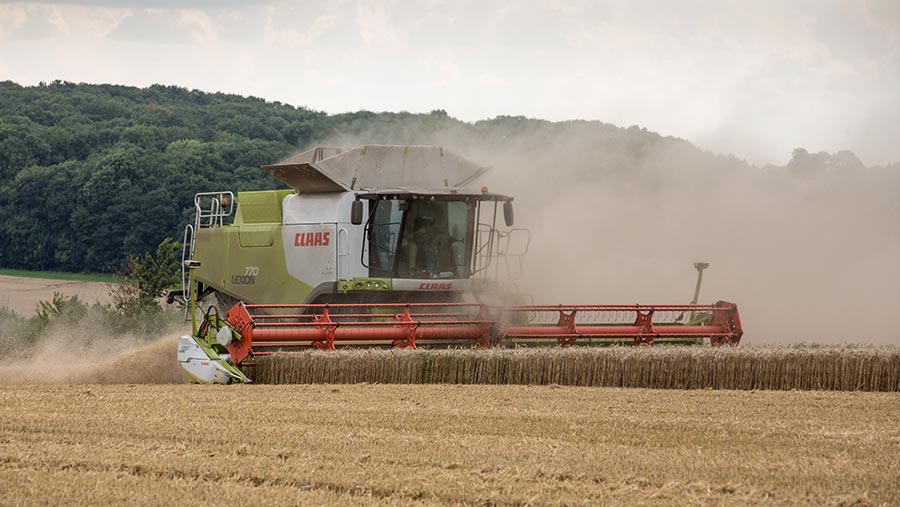 Combines made rapid progress over the record-breaking bank holiday weekend, with harvest in the east of England almost wrapped up.

But further west and north, there’s plenty still to go at, with grain quality becoming a pressing concern.

In north-east Scotland, the spring barley harvest is nearing 40% complete, according to Gary Catto, chief executive at Highland Grain.

“Quality is good, nitrogen contents are averaging 1.4% and there’s no sign of pre-germination yet, although we are getting reports of it in Perthshire.

“We’ve also heard of some skinned grains, but haven’t seen any yet.”

About 80% of the spring barley crop is Laureate, with the rest predominantly Concerto, and yields are averaging just over 7.4t/ha, said Mr Catto.

Specific weights are about six points below last year, at about 61kg/hl.

“When it started coming in, moisture contents were about 19-20%, but the past couple of days have been phenomenal, so it’s dropped to 14.5% in places.”

A lot of the crop is ready now, although some is still seven to 10 days off.

“There is a bit of brackling, but generally farmers are very positive.”

Across the water in Northern Ireland, Graham Furey is expecting to finish harvest at Castleview, Killyleagh, today (27 August) – unusually early for him.

“It’s been a bit stop-start, but the past three or four days have been very dry so a lot’s been done.”

“Yield-wise, it’s been as good a harvest as we’ve ever had.

“But the straw has been very green, so about three-quarters of it is still lying in the field.”

“I’ve never seen wheat like it – it’s been a good growing season all the way through.”

However, prospects are not looking as good in southern England, where the wet weather has caused significant damage to remaining crops, according to Izzie Lawrence, store manager at Trinity Grain.

“There’s a lot of wheat still in the fields – we’re about three-quarters of the way there and quality has dropped a lot,” she said.

Hagbergs have fallen back considerably, particularly in Skyfall, with some protein levels also suffering, she added.

“That said, there’s still some Crusoe coming off at 14% – it’s held up the best around here.”

The rain has also affected spring barley quality, with a lot of split and skinned grains and fusarium creeping in.

“The maltsters don’t like the look of it at all – it’s a real shame because anything that came in early was lovely and bright with low nitrogen.”

Fortunately, the later crops have not needed much drying, with moisture contents now about 13%.

It is a very different story in East Anglia, which has generally escaped the worst of the weather, according to Andrew Dewing at Dewing Grain.

“With the exception of some beans, harvest is pretty well done, and people are happy enough with their yields,” he said.

“Spring barley yields have been 20% above expectations so we’ve had to make sure we have enough capacity for the wheat – logistics is king.”

Some spring barley has been affected by the rain, so would have to be segregated in store, but, generally speaking, samples have been nice, with big, bold grains and low screenings, he added.

“Wheat yields have been reasonable – although perhaps not as big as first thought.”

Bean yields are also looking promising, although there is plenty of bruchid beetle about.