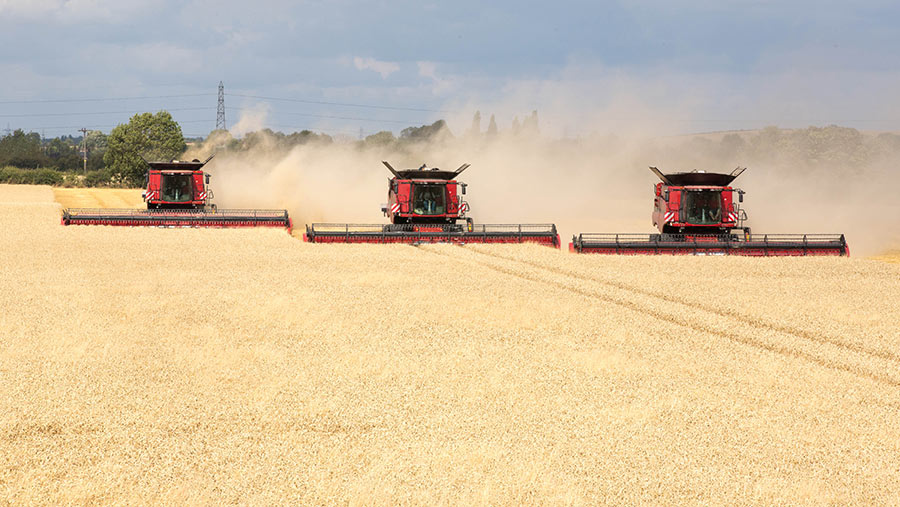 Just over four-fifths of the British cereals and oilseed rape harvest is complete as winter wheat and spring barley combining has raced ahead in the recent hot weather, with the biggest wheat crop since 2015 now forecast.

Some 3m hectares of cereals and oilseed rape had been harvested by Tuesday 27 August, or 81% of the total area, with the past week seeing the largest area cleared in a single week since records began in 2008, the AHDB said in its report prepared by crop consultant Adas.

Some 79% of the wheat crop is harvested, equivalent to 1.4m hectares, leaving an estimated 380,000ha to cut – mostly of feed varieties with small patches of milling wheat in the north.

Harvest is complete with yields estimated at 7.4-7.6t/ha, a 6-9% increase on the five-year average of 7t/ha. The majority of the crop was harvested during earlier settled weather and most samples met quality specifications. Specific weight averaged 64kg/hl, with a typical range of 63-64kg/hl. Grain nitrogen for malting varieties has averaged 1.6% with a range of 1.4-1.7%.

The spring barley harvest is 62% complete, with most of the remaining crops in Scotland and northern England. Yields are estimated at 5.4-5.8t/ha, a 2-9% increase on the five-year average of 5.6t/ha, with malting varieties typically yielding 6.5-8t/ha and feed varieties up to 10t/ha.

Most crops are meeting quality specifications despite the poor weather, with specific weights averaging 64kg/hl and ranging from 63-68kg/hl. Grain nitrogen for malting varieties averages 1.6%, with a typical range of 1.3-1.7%.

The harvest is complete in most regions, with yields estimated at 3.2-3.5t/ha, just below the five-year average. Farm yields ranged from 1.2-5t/ha, with lower yields reflecting the level of cabbage stem flea beetle and pigeon damage. Oil contents are slightly lower with an average of 44%, and a range of 38-48%.