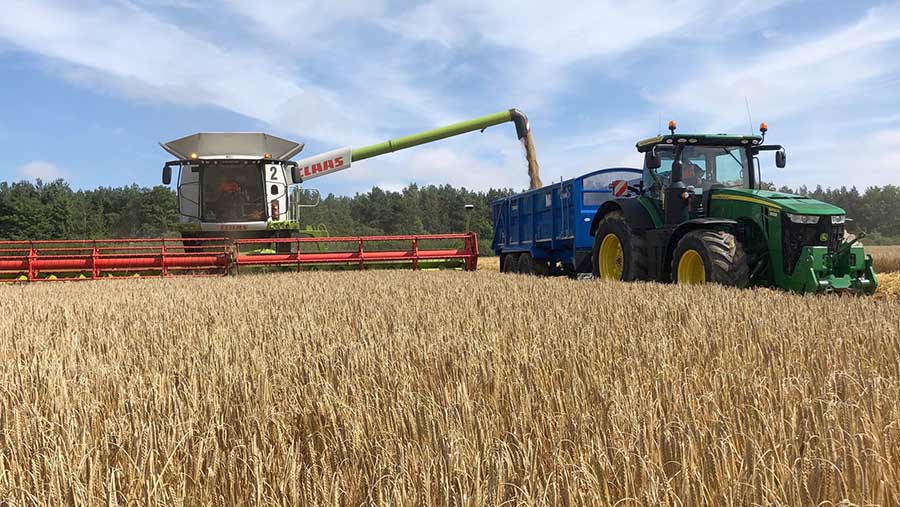 Patchy rain showers are continuing to hamper harvest in the North of England and Scotland, with fit oilseed rape crops stranded in the field causing backlogs for farmers.

Farmers in Lincolnshire are being held up by the rain, according to Dan Murphy at Woldgrain, Gainsborough.

“Things are good. If only the weather would start co-operating,” he said.

“The forecast for this and next week says there isn’t a single dry day, let alone two together. At this rate harvest will be a bit gradual.”

“Feed barley has been good, with big bold grain and good bushel weights averaging 65kg/hl,” he said. “I think the rains came at the right time to fill the grain and everyone is reporting good yields.”

However, if yields continue to perform as strongly, there are concerns that the store could be tight for space. 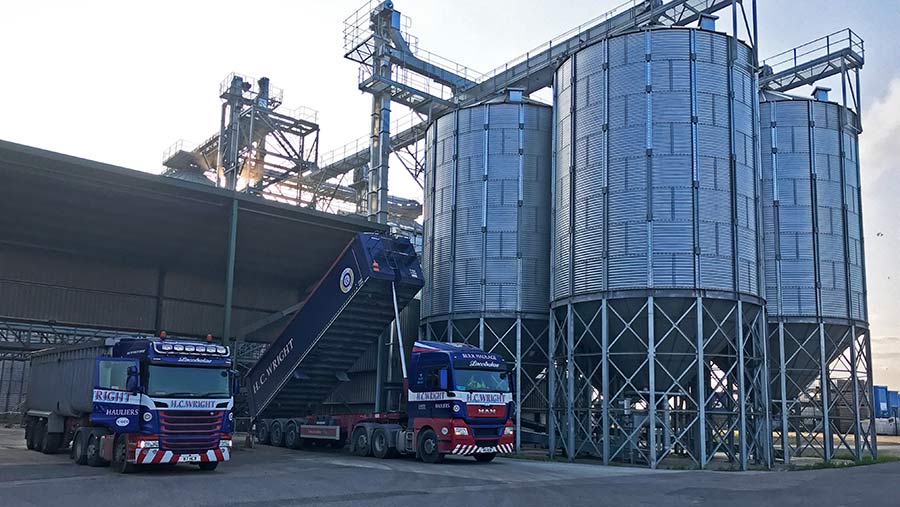 Woldgrain in Lincolnshire could run short of storage © Dan Murphy

Oilseed rape has been a different story, though. “Some are reporting yields in line with the five-year average and other people not so good,” explained Mr Murphy. Yields and moistures have been variable and patchy, even within the same group of fields.

“There is still an awful lot to get in. The last thing we need is thunderstorms.”

Further north, the winter barley harvest is about three-quarters completed, with harvest a stop-start affair, according to David Young at GrainCo, Tyne and Wear.

“We are getting a lot of wet days but yields are very good, with barley doing up to 10t/ha and specific weights around 65-66kg/hl.”

The oilseed rape harvest has just started, averaging 4t/ha. “Despite the weather the quality doesn’t seem to have been affected, but we need the weather to pick up,” he said.

Oats are now ready to harvest, and farmers have started to spray off wheat, which is still a week or two away.

“Farmers are agitated and progress is slow – the opposite to last year,” Mr Young said.

Weather has also been frustrating farmers across Perthshire, according to Robin Barron at East of Scotland Farmers.

“So far the only thing that has been done is winter barley,” he said. About 95% has been cut in the area and this has yielded very well. 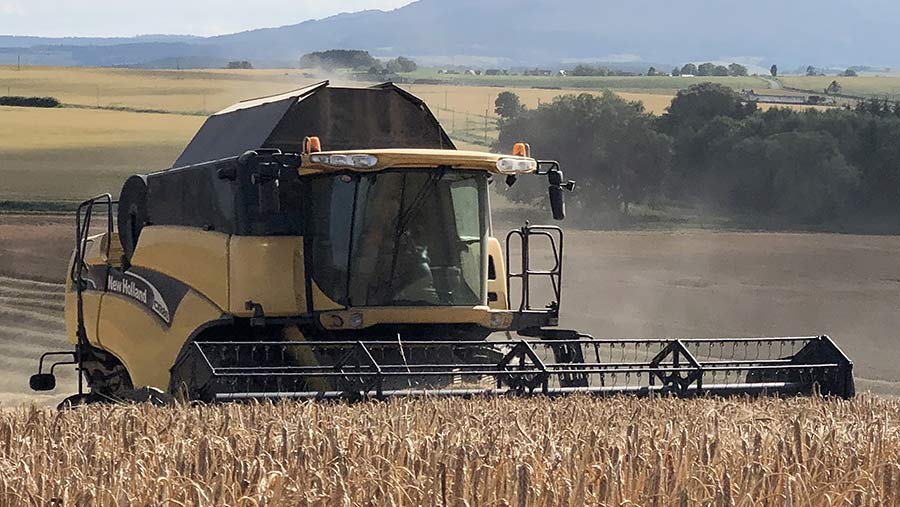 Murray Forsyth is pictured cutting 2-row winter barley on his farm near Inverurie, Aberdeenshire. He is hoping for some drier weather, as half of his barley straw is still to bale. His oilseed rape crop has been swathed and is ready for the combine at the end of this week.

“I would say yields have averaged around 9t/ha and quality been good too. Malting crops have all made the grade and feeds are all above 63kg/hl.”

In total the store has taken in about 7,500t of winter barley, but the main crop is spring barley. “Crops have good potential and it looks like being a big crop, but we don’t want it sitting in warm and wet conditions,” Mr Barron said.

The very earliest oilseed rape had been harvested but it was too soon to report on yield and quality, he added.

Down in the borders, winter barley harvest is a day off completion for Colin McGregor at Coldstream Mains Farm, Coldstream.

“The weather has been a bit catchy – we’re struggling to get two days together – but yields and moistures are good, with lots of straw,” he said.

Mr McGregor grew 305ha of Orwell, Sunningdale, Bazooka and Kingsbarn winter barley, with yields ranging from 10.45t/ha to 11.09t/ha dried. “The yields are very pleasing and specific weights are good, in the mid- to upper 60s,” he said.

“We have one more day to do and then we will be into oilseed rape, which is almost ready. If we had good weather, we would be straight through.”

Winter barley yields in your area

Check out the top five yielding winter barley varieties in your area by visiting our yield map. So far, there are results from 10 AHDB Recommended List trial sites across the UK.