Patchy weather may have stopped play for a short while, but combines are rolling again in some areas. However, most are experiencing poorer yields and quality.

The oilseed rape harvest is well under way for Stephen Moore at Manor Farm, Salisbury, but the 60ha of V367OL HOLL cut so far has brought disappointment. “The yield has been appalling at 2.72t/ha,” said Mr Moore.

But quality was down on last year. “Last year the specific weight was 80kg/hl– it’s probably the downside of the wet weather,” he said.

However, the Laureate barley has produced a reasonable sample so far. “It has done 7.4t/ha over 40ha. We have another 101ha to cut but it is starting to brackle.”

The oilseed rape and winter oat harvest has finished for Will Wombwell at Rectory Farm, Saffron Walden. “We had mixed results on the Blazen oilseed rape – anything from 2.8t/ha up to 4.6t/ha on the best,” said Mr Wombwell.

The 80ha of Southwark winter oats varied from 6.5t/ha to 8.3t/ha and the 48ha of Orwell winter barley performed well, averaging 9.7t/ha. 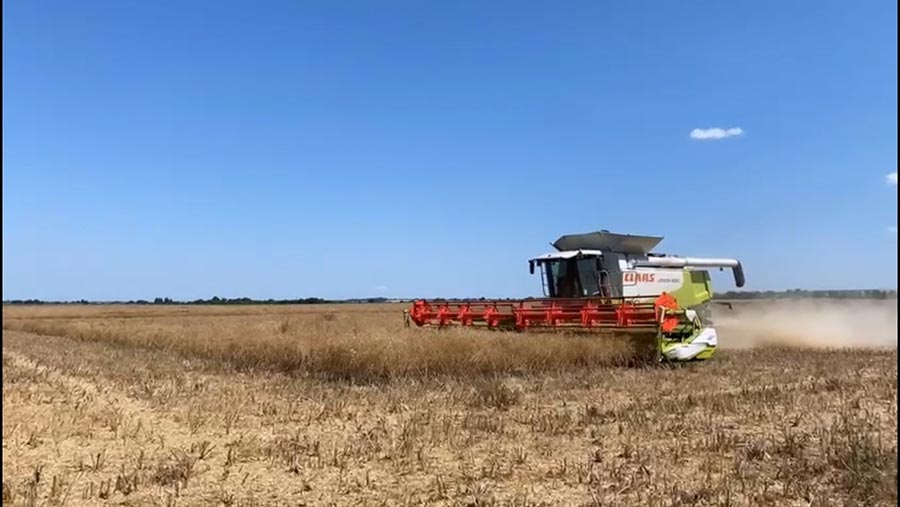 He has started on his 485ha of winter wheat, having cut 40ha of Zyatt and 80ha of Santiago. “The earlier drilled stuff has averaged 10.2t/ha, but anything drilled later has averaged 2t/ha lower – anything from 8.1t/ha to 8.5t/ha.”

Santiago averaged 9.5t/ha. “It’s a nice dark colour and is weighing well, so I’m hoping the proteins will be there.”

Stephen Whitby at Rowley Farm, Wexham, is waiting for the next weather window to continue combining his winter wheat.

He managed to make a start, combining 101ha of 324ha, but persistent rain has held him off.

Skyfall averaged 8-8.5t/ha and 80kg/hl specific weight, with protein at 12.5%. Hagbergs were above 300, but moistures of 18% meant drying and some blending were required.

Growing 48ha of Bazooka winter barley, he has been left a little underwhelmed with yields, which averaged 7-7.5t/ha, with 64-65kg/hl specific weights. “It looked like it was going to yield more, but the low specific weights seem to be a common theme for most growing barley,” said Mr Whitby.

With most of the winter wheat left to combine, plus 81ha Planet spring barley and a small acreage of oats, Mr Whitby is hoping for good weather. “At this point we’re normally three quarters the way in or finished, but at present we’re only about 25% of the way into harvest.”

Geoff Thomas had finished his 30ha of Kingsbarn winter barley at Pantycoch Farm, Letterston. “I’m delighted with it,” he said. “The worst field did 7t/ha but we’ve averaged 8.4t/ha. The beauty is, we don’t have to dry any of it.”

His 44ha of Laureate spring barley is looking promising and he hopes to make a start next week.

In County Amargh, the combine has just started up again for Simon Best at Acton House Farm, after a temporary hiatus – and so far crop performance had surpassed expectations.

His winter barley has performed exceptionally, with Infinity and Thunderbolt yielding 8.6t/ha and 9.9t/ha, respectively, and Valerie yielding 10.4t/ha.

Specific weights averaged 68kg/hl with all grain dried and cleaned across the 75ha.

The combines entered his 91ha of oilseed rape last week (4 August), but heavy rain stopped play mid-week. “So far we’ve combined Imprint and Aspire, and had excellent yields of 4t/ha and 5.2t/ha, respectively,” he said.

He is optimistic going forward – if the weather holds out. He has 25ha of Exstar oilseed rape left, 121ha of Mascani winter oats and 152ha of Graham winter wheat. “They are ready and look strong and clean. We are hoping for 7t/ha from Mascani and an average of 8t/ha from Graham.”