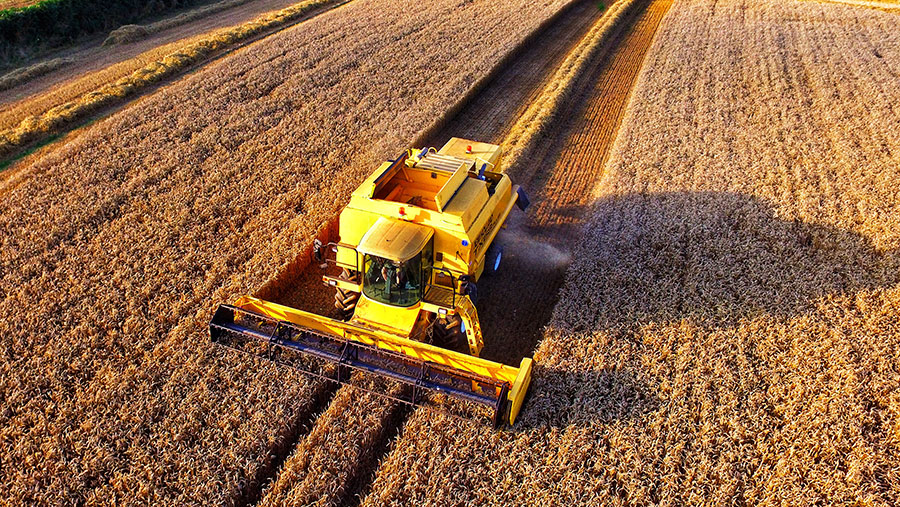 “Yields have been reasonable,” said Mr Dymond, who grew the crop on a low-input approach with zero fungicide or insecticide applications and just one autumn herbicide spray.

Harvest of 18ha of Extase began at Trevispiean-Vean Farm on 3 August at 17% moisture with a specific weight of 75kg/hl.

The variety had performed well all season, until four weeks ago, when a very wet and mild weekend created the perfect septoria storm, causing a suspected yield penalty of 1-1.25t/ha.

“We grew Extase last year without any fungicide applications, but this year we are not so pleased,” he said.

Mr Dymond operates a no-fungicide regime across both his Extase and Graham feed wheats, working closely alongside his agronomist, William Iliffe.

Considering this, crops did well, given the wet and mild Cornish climate, where many growers deploy a three- or four-spray approach.

He also grows a few conventional fields – managed by other agronomists – where fungicides were applied, but these don’t appear to have weathered the septoria onslaught any better.

This approach aims to achieve adequate nitrogen levels within the crop, with strategic applications that maintain a strong, robust plant with good disease resistance, while stimulating microbiology, bacteria and fungi.

Despite the disease outbreak, the crop of straw remained clean, with yields hitting more than 5t/ha.

All grain and straw is kept on farm and used as feed and bedding for the farm’s livestock.

Mr Dymond added that his winter barley yield ranged from 5-7.5t/ha for the variety Cassia.

This was disappointing overall. The lower-yielding crops suffered as the result of a few establishment difficulties after he trialled direct disc drilling into maize stubbles, without any prior cultivation.

Next to harvest will be the remaining Graham winter wheat, which he hopes to cut at the end of this week if the weather allows.