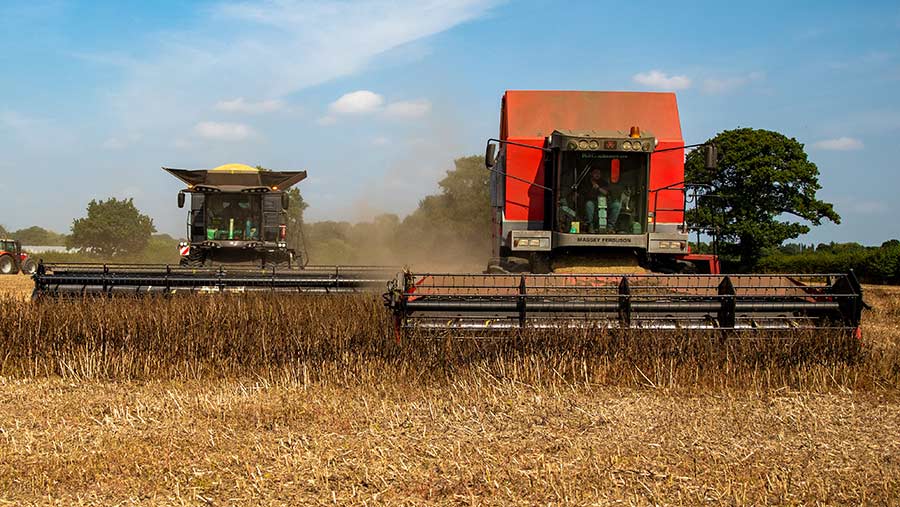 As most farmers wrap up the tail-end of harvest, a few areas are still trying to catch up after a very protracted season, which has seen many crops needing a lot of drying.

Over the past two weeks, harvest has gone well with most if not all farmers in the South having wrapped things up, according to Simon Wilcox, farm grain origination manager at Cefetra.

“Farmers really cracked on and though there might be the odd bean crop left, pretty much everything was done and dusted before the rains came.

“Despite this, it was hard work getting the moisture contents down – even through longer dry spells – because it wasn’t sunny enough, so a lot were still combining at 16-17%.”

The entire harvest has been variable, whether it’s Hagbergs and proteins on milling wheats or retentions in malting barley, with yields perhaps hitting the five-year average.

“For those with milling wheat with proteins down to 12% or specific weights below 76kg/hl, it could still be worth keeping it separate and talking to merchants before doing anything,” said Mr Wilcox.

Some bean crops are still being brought into store, with yields holding up. “The quality as a feed bean is absolutely fine, but I don’t think many will make human consumption.”

Mr Wilcox has started to see some crops come in with ergot, especially from eastern counties. “It’s one for farmers to be aware of and keep an eye on as we’ve seen both normal and blackgrass ergot.”

At Woldgrain Storage, crop intake is 68% complete, with a further 30,000t still expected to come in. “We haven’t had any beans yet,” said Dan Murphy, laboratory and haulage manager.

“We have had a few farm samples and those look a mixture; some are really good human consumption level and some not.”

Luckily, the crops coming into store have become drier as September has progressed, with wheat going from an average of 18% moisture a week ago to 16.1% on 13 September and barley from 17.2% down to 15.7%.

“This is handy as it’s helped us get more through the store in terms of daily average tonnage, helping us catch up,” said Mr Murphy.

However, wheat specific weights have been poor, with milling varieties struggling to get above 76kg/hl and Group 4s and soft wheats often less than 70kg/hl.

On the other hand, spring barley quality has been very good.

“There have been low nitrogens across the board, screenings have been good and there haven’t been any problems with pre-germination on the malting barleys like last year.”

Further north, Andrew Gloag has had a good harvest at Busby House Farm, Stokesley, with field performance being made up for by commodity prices.

“It’s lower than our 10-year rolling average of 9.9t/ha and specific weights averaged 74-76kg/hl, which is indicative of the yields. But it’s all for feed and is a very acceptable result given where we have been with the weather.”

He has one patch of spring barley to wrap up before moving into spring beans at the end of the month.

Harvest is gradually coming to an end after a stop-start season in the North East, according to Dave Young, farm trader at Grainco.

“The wheat yields have been good – we’ve ended up with more than last year as that was a poor harvest – but the quality is starting to tail off.”

Malting barleys are still coming into the store, displaying variable quality, but with good nitrogen contents in general.

The spring oats have yielded well, but the quality has been poor.

“The samples looked alright, but the specific weights have been less than 50kg/hl,” said Mr Young.

Winter beans have started to come into store, with good quality, but yields are lower than expected, at about 3.8t/ha on average.

“There just wasn’t enough rain in the spring for them, but they will be going for human consumption.”