Frustration is becoming the key word of harvest 2021, with producers desperate to get on with combining, but continuing to be held back by wet weather. However, yields and quality have been reasonable, so if the weather turns, there is still optimism to be found.

In County Down, combines are just making a start into the winter wheat, and early results look promising, according to Charles Davidson, director at North Down Grain. “We had six to eight weeks of drought earlier in the year and thought that yields would have really suffered, but they are surprisingly good,” he said.

Winter barley yields have been down on last year, but not as much as expected and, so far, wheat yields are mirroring that trend. “Winter barley straw yields and specific weights are both good, but wheat straw is very short,” said Mr Davidson.

“Spring barley is still two weeks away and that did suffer with the drought – the weather is just so up and down.”

It’s a similar story in the East, with unsettled weather causing worrying delays to harvest. “We’re only 20-25% through,” said Stuart Attridge, director at Harlow Agricultural Merchants. “If farmers can grab it now, we will be OK, but quality is dropping.”

In the six weeks before harvest, the region got 20% fewer hours of sunshine than last year, which – along with fusarium problems – has hit specific weights. Wheat is 3-5kg/hl below last year, averaging 74-76kg/hl, while winter barley is 3kg/hl down at 60kg/hl.

“Protein content in the wheat is all right, but Hagbergs are starting to drop – we had some in yesterday at 200-210 seconds,” said Mr Attridge.

Wheat and winter barley yields have reached a good average, but oilseed rape has been unexciting at just over 3t/ha. “Oil contents are 1-2 percentage points down due to the lack of sun, and the seed is a lot smaller than last year.”

On the upside, export opportunities are looking strong, so providing the weather dries up, there should be plenty of demand for good-quality grain, he added. 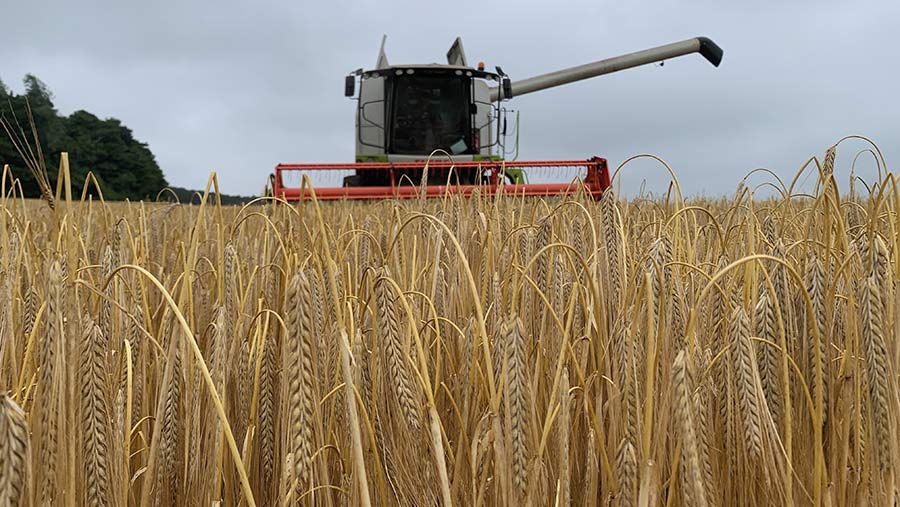 On the other side of the country, Isabel Udale-Moseley is hoping to get back into the oats at Eyton House Farm, Telford, as soon as the weather allows. “We’ve just started them and the specific weight is about average; it’s a nice sample, but too early to tell on yield,” she said.

Oilseed rape has been about average, with little to pick between three different varieties, while wheat on the lighter land has done well. “We’re very pleased; we got the rain in time and the light land has performed better this year.”

Costello and Gleam came off at 9.4-9.9t/ha, while Garibaldi as a second wheat did 9.1t/ha. “We did a trial for Zantra and it has done very well.”

In the Cotswolds, winter barley has proven very pleasing for Ian Branston at Bourton Hill Farm. “Harvest has been pretty good. We got all the winter barley off at just under 10t/ha,” he said. The 81ha of California had been drilled early and achieved a good overall specific weight.

However, his oilseed rape was pretty disappointing and struggled to make 2t/ha. Luckily, he grew Rocca, a high-erucic acid rapeseed variety, and the price has made up for the poor yields.

Mr Branstone’s most pleasing crop has been a specialty pea grown for racing pigeons. It came off several weeks ago, before the rain set in, but still needed drying, which was a difficult task. “I’ve not grown them before, but they averaged 6.5t/ha, which is phenomenal,” he said.

He has now started combining winter wheat as well as some spring barley for a neighbouring farmer. “We have Skyfall, Siskin and Extase, and still have most of it left to do – it looks as if it will do very well, though.”

He also grows canary seed, which is looking promising. “It’s cheap to grow and high value, but next year I think I will push more towards the peas.”