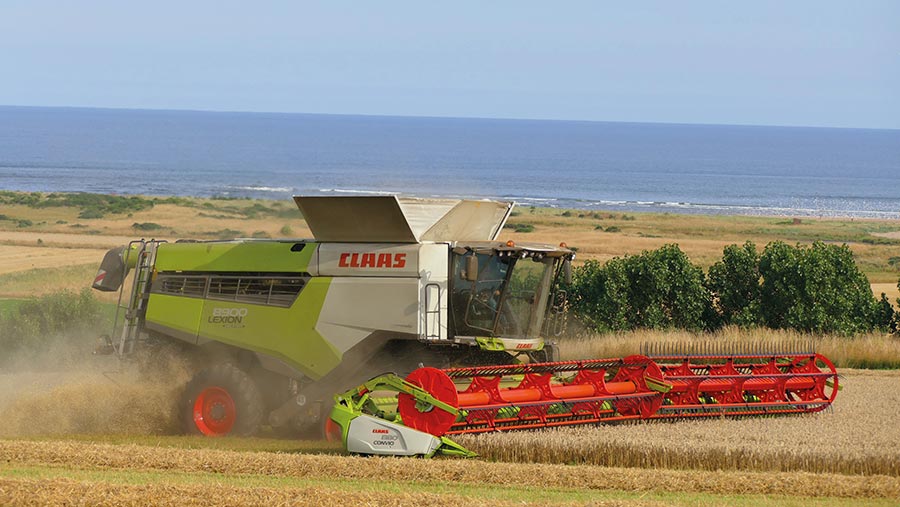 After weeks of struggling in damp conditions, combines have been out in force, but although yields have been middling, milling wheat quality has suffered.

In south-west England, combines have just the last fields of beans and linseed to clear.

“Yields across the crops have, largely, been as expected,” said John Collins, store manager for Cannington Grain and Kernow Grain. “Everything came in wet, at about 17-18% moisture, but compared with last year it hasn’t been too bad overall.”

However, milling wheat proteins have been exceedingly low, averaging 12.6%, he explained. “Only one in four tonnes has made Group 1 full specification – it could be down to nitrogen uptake being affected by conditions.”

Despite the dismay, Extase has consistently produced good samples, he added.

Oilseed rape is having a revival in the area, with 2,083t in store. “We used to see about 5,000t of oilseed rape, but it dropped right back to 1,500t, so the increase in tonnage this year is showing that there is still an interest.”

Heading north, the recent sunshine is being well received by growers, but varying quality will leave some happier than others.

“The heatwave we were promised has arrived – for now,” said Philip Smith, director at Western Arable Services. “It’s been a late harvest and we need another week of good weather to finish off the last of the cereals – there is probably still about 25% left to go at.”

Winter wheat has yielded on the better side of average, with some farmers very pleased to see 10t/ha, but quality remains varied. “Quality has been a real mixed bag – the most variable it has been in a long time,” he said. “We’ve had proteins as low as 8.8% and a massive range in Hagbergs, from 167 to 350 seconds – I think the amount of rain through May really affected residual nitrogen.”

Again, Extase has been a top-performing variety, with Skyfall falling back a little.

The tonnage of oilseed rape into stores has been on the low side this year after growers dropped the crop, but the tide has turned, according to Mr Smith, with many reintroducing it into rotations, a likely reflection of the strong market.

Further north, intakes at Argrain are ahead of expectations, according to managing director David Padgett, with combines into the tail-end of wheat – and there is a new crop in town.

Disparity in yields has been notable, with Gleam performing well, averaging 10t/ha. Sundance – even with same soil and drilling conditions – has produced low specific weights and yields.

The area has also seen growing interest in rye. “Many growers are interested in growing rye for next year, with a lot of pig feed compounders and producers with their own mills,” said Mr Padgett.

“Yields are exceptional at 10t/ha – it’s cheap to grow and can do well on poor land, but the downside is keeping it stood up.”

In Scotland, farmers have made mixed progress with harvest, according to Bruce Ferguson, Scottish general manager at Frontier.

“The Borders are well through and close to finish on the wheat, but in Aberdeenshire it’s variable, with more central parts still having about 30-40% left to harvest,” he said.

Spring barley has been generally good at 5-7.5t/ha, and quality is a similar story, with soil types and weather playing their part. “Quality has been better than last year,” he said. “The Borders and central Scotland have seen about 15-16% moisture, which makes a big difference to grain condition. If we can get the weather we’ve been forecast, quality will hold.”

Wheat is looking good so far, with oilseed rape yields and quality no better than average, and winter barley possibly better than expected.