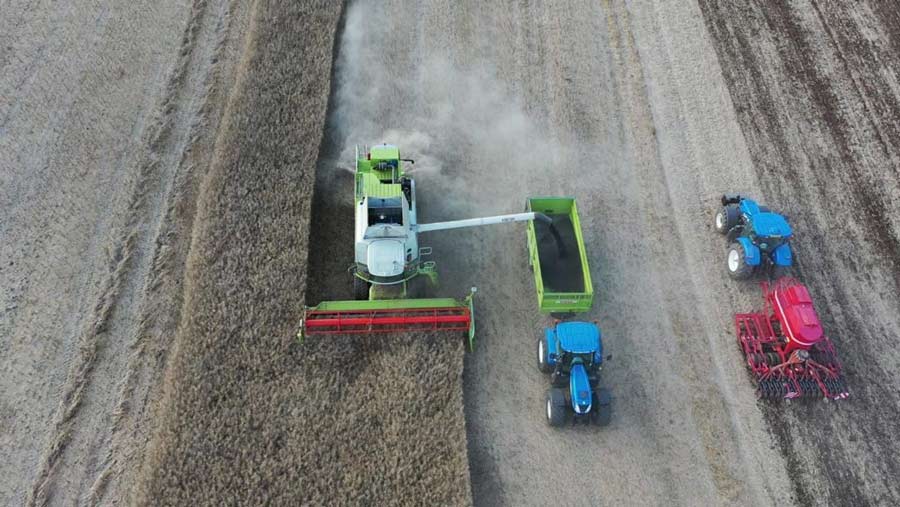 With hopes of finishing harvest reliant on fine weather, many have had a week of unsettled conditions (week commencing 23 August), preventing combines from getting into the final few hectares.

In the North, harvest has been very stop-start for Scott Campbell at Kirkton Farm, Kinellar. “It’s just been a bit slow, but I can feel there is a very busy time approaching,” he said.

The 66ha of Platinium oilseed rape was slightly disappointing in some of the early-sown fields. “The yield is back on the five-year average to 3.4t/ha, but it was better on a second block of land at 4.3t/ha.”

He hoped to make a start on the 125ha of Sassy, Diablo and Tungsten spring barley on 26 August, which was looking well in the field, as well as the 65ha of Lily, Skyscraper and Elicit wheat. “We haven’t had any flat barley, which is good. I think the growth regulators have paid off.”

Heading to the East, rain has stopped play for Stuart Baker at Ivy House Farm, Woodbridge. “We haven’t done an awful lot over the past few days – we’ve cut 12ha of Saki, a biscuit winter wheat and we have another 8ha to go,” said Mr Baker.

Moistures have come in at 18% and have yielded between 9.4t/ha and 9.6t/ha. “I was hoping it was going to do a lot better, but that’s the same with everything we’ve harvested this year – everything has been around 9.6t/ha to 9.8t/ha.”

He has also finished his 21ha of Skyscraper which yielded 9.6t/ha – it met the biscuit quality specification with specific weights of 74.5kg/hl, 12.3% protein and 272 Hagberg. The 24ha of Grafton and 15ha of Kerrin yielded 9.6t/ha and 9.2t/ha, respectively.

Yields have been below average, as he would normally expect around 10.5t/ha. “Considering what the crop has been put through this year – I think it’s a miracle we’re getting anything.”

Across the country, the wheat harvest is still in progress for Duncan Whiteman at Arlescott Farm, Telford. “We’re in a much better state than last year, which is the same for everyone else around us too – we had really bad crops last year because of the weather, harvest was very late and it all fell on the floor,” he said.

The 20ha of Extase wheat cut so far has yielded a pleasing 11t/ha. “Moistures have been around 16% or higher, specific weights seem really good – with good-sized grains.”

With only 3ha left to cut of the Extase he plans to move on to the 20ha of Gleam tomorrow (28 August). “Yield on the Extase has been 1.8t/ha up on the farm average, but the Gleam is looking like it will achieve the average at the moment.”

In the South, Ashley Jones was hoping to cut his final 6ha of Diablo spring barley on 26 August, which will complete harvest of his cereal crops at Smeaton Farm, Saltash. “We have 26ha in total and 20ha in the barn so far. It has been yielding 6.6t/ha, which is higher than we usually achieve, so we’re pleased with that,” said Mr Jones.

His winter barley – 26ha of California and Mountain – yielded 6.6t/ha. “I am disappointed with the yield, although it has been better than previous years – the drought in the spring and the wet May when it was flowering has pinched the grain,” he said.

However, the 16ha of Ambassador and Aspire oilseed rape has been the highlight of the harvest so far. “We’ve achieved our best-ever yields of between 3.9t/ha and 4t/ha. We normally average 3.2t/ha and 3.4t/ha.”

The 20ha of Sundance and Extase winter wheat yielded 9.2t/ha – on par with the usual farm average. “Sundance let us down a bit this year, due to a late infection of barley yellow dwarf virus in May, but straw yields have been good – up on previous years.”

Specific weights on wheat and barley have been variable, at 73kg/hl on the Extase, 68kg/hl on Sundance and 74kg/hl on Diablo.