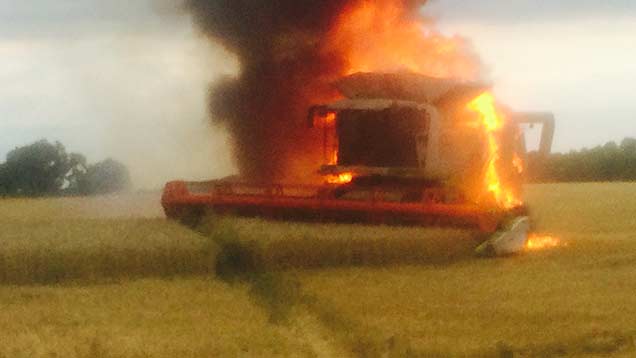 An arable grower has called for better rural mobile phone coverage after he narrowly escaped serious injury when his combine was engulfed in flames.

Members of Chris Nott’s friends and family looked on in horror as his Claas Lexion 600 caught fire during harvest at Pebmarsh, near Halstead, Essex, last week.

Despite desperate attempts to alert Mr Nott using mobile phones he was totally unaware that dust had ignited at the back of the combine and it was fast turning into a fireball.

In an interview with the BBC Mr Nott said: “The first I knew about it was my daughter’s boyfriend running alongside me, waving his arms in the air, shouting ‘fire’.

“In this day and age you should be able to get a signal everywhere, it is a must really”
Chris Nott, Essex farmer

“He had been trying to phone me from the bottom of the field but could not get through.”

He added that if he had been on board for a few minutes more the “outcome would have been a bit different”.

“You need a phone signal. It is a worry, definitely,” Mr Nott said.

“In this day and age you should be able to get a signal everywhere, it is a must really.”

Neighbouring farmers helped to contain the blaze by creating breaks before the fire service arrived.