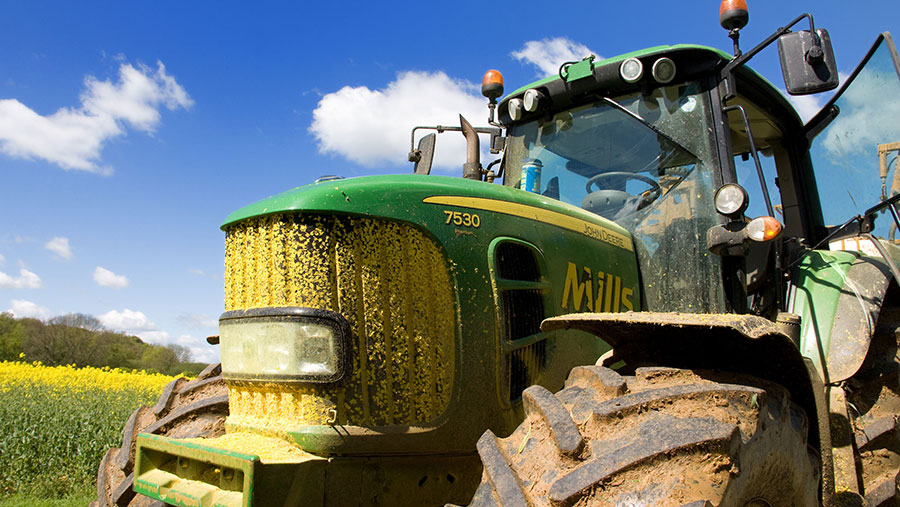 Oilseed rape yields jumped sharply this summer as the weather seemed to suit the crop while the picture with wheat output was more regional.

Prospects for the rapeseed crop edged higher as harvest approached and average yields of nearly 4t/ha have encouraged a rise in the crop’s area this autumn after five successive seasons of declines.

Following this summer’s high yields and rapeseed prices above £300/t some experts expect this autumn’s crop area to be up 5-10% and could touch 600,000ha.

Philip Kimber, oilseed trading manager at Frontier, says the lack of summer sun last year hit yields but the weather was much better for the crop in 2017.

“This year there were good conditions in most rapeseed growing areas, and most crops avoided the wet at harvest,” he told Farmers Weekly.

Wheat was a more mixed picture with Jonathan Lane, trading director at grain trader Gleadell, saying it was largely related to variable weather across the country.

“The picture is very regional on yields and quality with a very prolonged harvest as our first barley came in late June and we had some wheat cut last week,” he said.

Quality was variable with south-west England hit by heavy rain at harvest which saw Hagberg levels plummet, while quality was better in central and northern England.

Defra figures show wheat yields rose 7.6% compared with 8.5t/ha, and 7.3% ahead above the five-year average.

Agronomists suggest oilseed rape and winter wheat crops coped better with the vicissitudes of the weather because of their long growing season.

Despite the dry spring, autumn-drilled oilseed rape and wheat had time to recover compared with spring barley which only showed only very minimal yield increases.

John Latham, Cambridgeshire growers and chairman of grain co-operative Camgrain also reported a mixed bag in terms of yields and quality from the wheat harvest.

The middle of Cambridgeshire caught the worst of the drought and the summer rain came too late to help crops, he added.

Quality was also a mixed picture with early wheats fine, but while proteins stayed high, Hagberg levels were all over the place.

Winter barley national yields showed a 14.5% rise to 7.1t/ha over the poor season of 2016 as crops were cut before the summer rain, but yields were only up 4.1% compared with a five-year average.

Spring barley was the big disappointment with average yields at 5.7t/ha only a fraction ahead of 2016 and the five-year average yield, with experts saying the crops never recovered from the very dry spring weather.