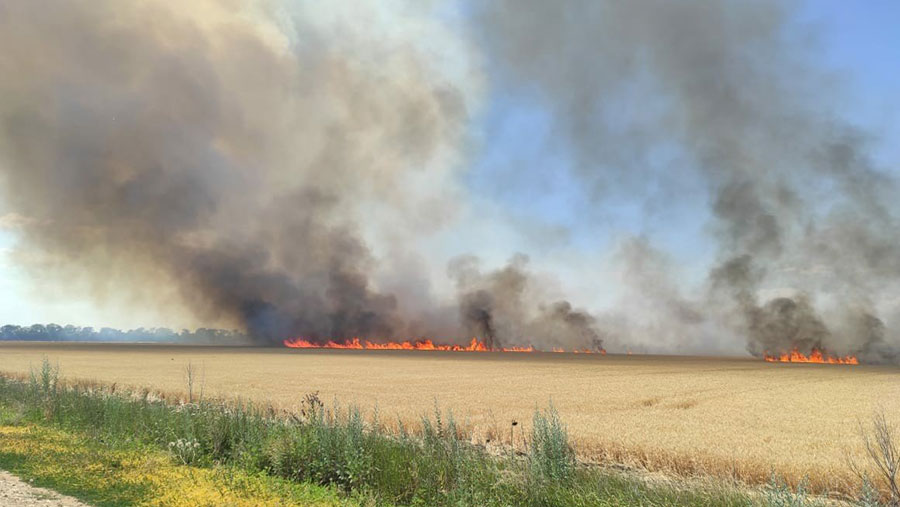 © Police of the Kherson region

Russian forces have been accused of deliberately burning crops in Ukraine as the country’s farmers continue to face huge disruption to grain exports due to the Black Sea blockade.

Footage shared on social media appears to show fields of crops in Ukraine on fire, with reports that the farmland is being targeted on purpose.

In the Kherson region, police have opened an investigation into the crop destruction.

The police force said hundreds of hectares of wheat, barley and other grain crops have already burned, and due to the threat of constant shelling it was difficult for farmers to extinguish fires.

Meanwhile, footage filmed by the Ukrainian journalist Yuriy Butusov, and shared on social media, shows a field on fire, with reports that Russian forces shelled a wheat field in the Kharkiv region.

The video of the fire was published by a #Ukrainian journalist who fights in the ranks of the Armed Forces of Ukraine, #YuriyButusov. pic.twitter.com/euFOMhTndd

It is estimated that Russia’s blockade of key Black Sea ports has trapped more than 20m tonnes of grain in Ukraine, which is fuelling fears of a global food crisis.

It also means the country’s farmers have limited storage space for this year’s crop.

Alla Stoyanova, the head of the department of agricultural policy of Odesa region, told the Guardian that 5-6m tonnes of grain used to be exported every month via six ports in the region.

This export capacity has been significantly reduced as other less-efficient routes, such as rail, road and river, have to be used to get grain out of the country since the Russian invasion.

Ukraine is restoring and expanding some of its long-decommissioned river ports on the Danube to try to accelerate exports of the country’s wheat, the newspaper reported.

The EU and the United Nations have demanded that Russian president Vladimir Putin ends the blockade of Black Sea ports.

Mr Putin has been accused of “weaponising” global food supplies by blocking the shipping routes, and now burning standing crops.