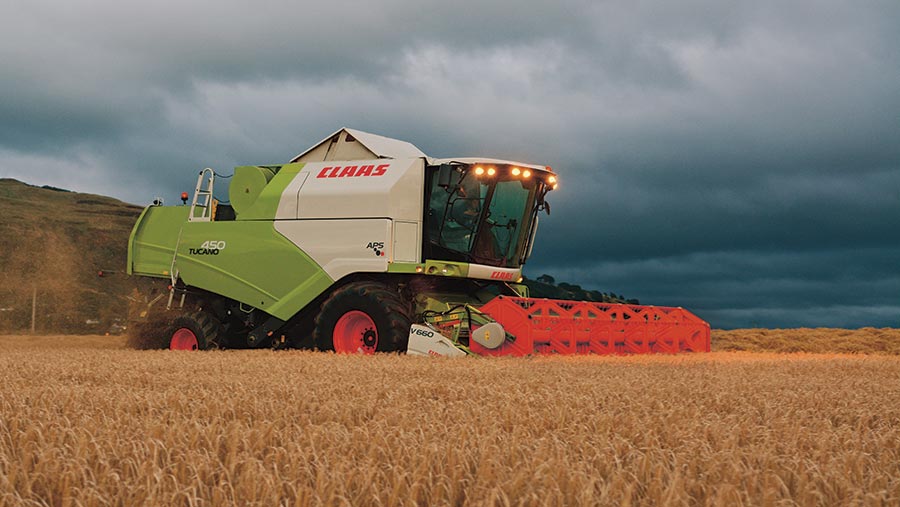 Grain quality from the Scottish malting barley crop is looking good despite a stop-start rain–hit harvest north of the border with only a small proportion of the area cut.

Harvesting in traditional early maturing areas, such as along the Moray Firth, is progressing well, but less than a fifth of the Scottish spring crop had been cut at the start of this week.

Grain quality is generally good with many crops below the 1.6% maximum grain nitrogen content which maltsters require to supply the distilling industry in Scotland, while beermakers often look for grain below 1.8% nitrogen.

Iain Green, farming along the Moray Firth, is well into cutting the main part of his spring malting barley crop with yields above 7t/ha and quality good despite summer rainfall being twice that of last year.

“Yields are good, but we need the weather to hold. Quality is still there as we are coming into a big chunk of our harvesting this week,” he told Farmers Weekly.

In a stop-start harvest, he points out that the farm had 353mm of rain from 1 June to 19 August, over double the 174mm of last year, and nearly half the farm’s annual 720mm of rain in less than three months.

His first fields of the variety Concerto produced grain nitrogen of 1.65%, but as he moved into Laureate, nitrogen contents dipped to 1.48% and showed low screenings of 2.8%, with a good yield of 7.72t/ha.

He had cut about 240ha of his near-600ha of spring malting barley early this week on the 1,400ha he farms at Corksie, Garmouth, Fochabers near the mouth of the River Spey.

Bob King, commercial director of Crisp Malting Group, said quality has been good across the Moray Firth and on to the Black Isle coming into its malting plant at Portgordon in Banffshire.

“The quality is better than expected from this area, but there is only 10% of the Scottish crop which has been delivered,” he said.

Neil Thomson, who farms 607ha in partnership with his father and brother at Caverton Mill, near Kelso in the Scottish Borders has cut 110ha of Concerto spring barley last week.

He said yields were slightly better than expected at 5.5t/ha after a difficult start to the season when seed sat still for a number of weeks in April and May because of dry weather.

With most of his crop delivered to the maltster, all has grain nitrogen between 1.5-1.6% although screenings were variable after some fields saw secondary growth.

He is hoping to switch to a combined seed and fertiliser drill next season after an on-farm trial revealed a yield increase of up to 0.5t/ha, and will also be changing varieties from Concerto to Laureate.

“Harvest is a good week ahead of normal, but the difficult showery weather is frustrating many growers. Yields are decent and on the right side of average,” he said.

Laureate is the variety showing the best yields in a Scottish market dominated by Concerto, but both are producing nitrogen level of about 1.4-1.5%.

Trevor Harriman at Scotgrain estimates only about 10-15% of spring barley crop has been cut by the start of this week and quality is most parts of the country was meeting malting specification.

“The general feeling from farmers is just wanting to get on – everything is ready to go, it is just a matter of getting it done,” he said.

One grower David Fuller-Shapcott in the Scottish Borders is three weeks away from his spring barley harvest after a cold spring delayed drilling into May on his 400ha farm at Sweethope, just north of Kelso.

He has already cut 25ha of Talisman malting winter barley in early August which yielded a disappointing 6.5t/ha after rain delayed harvesting by two weeks

This caused head losses through brackling, although grain quality remained good with nitrogen levels low at 1.4-1.55%.