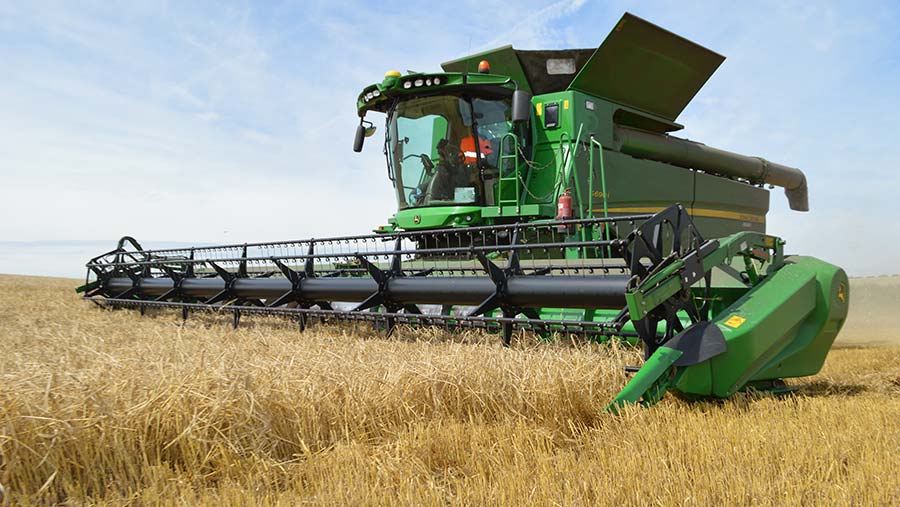 Harvest is well underway in the spring malting barley heartland of north Norfolk, with grain quality looking good despite a difficult growing season.

Grain coming off the fields is showing nitrogen levels generally higher than the last couple of years, but one leading maltster says most is deemed usable.

Malting barley heading for the distilling industry generally needs to show grain nitrogen levels of below 1.6% and for brewing sub1.8%, and many samples are looking good despite unfavourable weather.

Clive Fleming grows 120ha of spring malting barley in northwest Norfolk and the yield on his latest field was 5.5t/ha from the headlands and he is expecting it will rise in the heart of the field.

Many malting barley crops have struggled this season with a very dry spring, a heatwave in June and often heavy rains near harvest, but most of his crops have escaped the worst.

“We have been lucky with the rain coming throughout the season until the hot spell in June. This is a very low nitrogen farm and I would get 1.4% grain nitrogen in a normal year,” he told Farmers Weekly.

His first two fields combined died off in the June heatwave and ended up with high grain nitrogen contents, but a more recently-cut field showed nitrogen down at 1.4%.

For the last few seasons he has been growing the variety Odyssey on the 720ha of light chalky soils he farms from his base at Hall Farm, Shernborne, nearly 10 miles north east of King’s Lynn.

He started his winter barley harvest over two weeks earlier than normal this season on 4 July, cutting 80ha of the malting variety Flagon which yielded 5.9t/ha with a nitrogen content below 1.6%.

Leading maltster Bob King says grain nitrogen levels have been higher this season because of the dry spring, hot June and the lower-harvested yields.

“At present, the crop is not as bad as some anticipated. It is a mixed crop but at the moment we should get all the malting barley we need,” he told Farmers Weekly.

The malting industry buys annually about 1.9m tonnes of barley for distilling, brewing and the food industry, and Mr King said there should be enough this year assuming a safe harvest in the north of England and Scotland where spring barley combining is just starting.

“The Norfolk crop looks reasonable, but there are problems in southern England, south of the M4 due to the recent rain,” added Mr King, who is commercial director of Crisp Malting Group.

Crisp buys about 300,000 tonnes of malting barley annually to feed its five UK malting plants – three in East Anglia and two in Scotland.