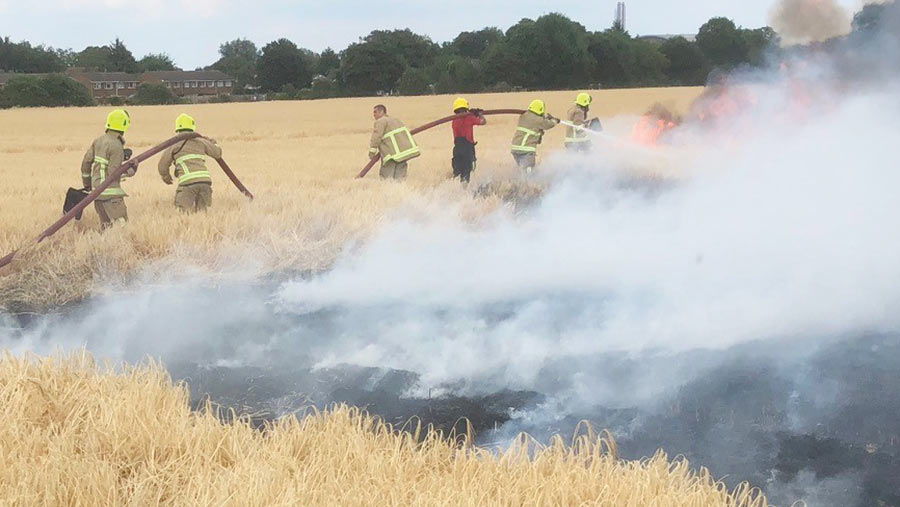 Since the early start to harvest at the beginning of July, Twitter has been awash with reports of crop fires across the country, exacerbated by tinder-dry conditions.

As the hot, dry and windy conditions continue, farmers should not underestimate the risk of fire breaking out on their land.

Colin Rayner, who farms at Berkyn Manor Farm in Horton, Berkshire, thought he had taken all the necessary steps to avoid a blaze in his crops but nevertheless fell victim to fire.

Farmers Weekly reporter Lucinda Dann went to hear how the fire started and what followed. Read Colin Raynor’s experience below, get practical tips on how to reduce fire risk and watch the video taken at the site of the fire.

When a plume of smoke rose from beside the bridle path running the full length of one of his fields just before 2.20pm on Monday (9 July), Mr Rayner put into action a plan he hoped he would never have to.

It took three fire breaks in either direction and 50 firefighters from the Surrey, Thames Valley and London brigades to extinguish the crop – stopping just 300m from the farmyard.

A large housing estate, school, petrol station and farm buildings, including the grain dryer and shed, and fuel tanks, also border the field.

In just an hour, 19ha of the 28ha field was razed to the ground; centuries-old hedges and trees were charred, possibly beyond the point of saving; and a John Deere tractor was lost.

Thankfully, nobody was hurt, and the losses will be covered by insurance, but it highlights how easily, after weeks of unrelenting heat and no rain, this season’s unusually dry crops will burn.

The risk of fire was already at the forefront of Mr Rayner’s mind as he had already had two near misses personally and had heard of several other fires on different farms.

The previous Friday (6 July) he suffered a combine fire due to a front elevator becoming jammed by fly-tipped rubbish hidden in the crop. This was extinguished in seconds, as his workers were properly briefed and equipped.

We have had our first fire on the combine. Our team put it out quickly.

A set of belts caught fire after the elevator got jammed due hidden debris dumped in the crop. The dumped plastic pipe in the photo was the problem.
We were lucky tonight. pic.twitter.com/JTAzIPai4F

On Sunday, Mr Rayner was helping combine on a neighbour’s farm when a member of the public raised the alarm that the headland was alight.

At 2pm that day it was decided it was too hot, too humid and too windy to safely continue and work was abandoned for the day.

When the field of Sunningdale winter barley was checked on Monday, Mr Rayner deemed it still too green despite measuring 11% moisture in some places, and opted to cut two other fields, which he considered higher-risk.

Unfortunately, the safety measure of ensuring each combine was accompanied by a tractor and a slurry tanker full of water meant they were both 20 minutes away when the fire broke out.

“The key is having a tractor and cultivator ready. We got in the field with two tractors within five minutes to cultivate using a TopDown cultivator and a subsoiler – that’s just what we had on at the time,” he says.

“It breaks your heart driving through a 9t/ha crop of Sunningdale to put in the cultivated strips.”

A fire on a different farm the week previously got out of control, escaping the field and catching several buildings alight. This meant that although Mr Rayner was told to stand back by the fire brigade, he felt forced to take action.

“I said ‘no’. Our concern was the school and the fire brigade weren’t in the field at that point. You have to reduce the risk.”

As there was no plan in place for how emergency services might access the field in such an event, it took 40 minutes before they could actively firefight.

In the meantime, the fire jumped the first two breaks put in the crop and consumed one of the John Deere tractors being used for cultivating, but was finally contained by the third.

“We lost one of the tractors. The fire was swirling and it got underneath the cab and caught the muck and grease alight.” 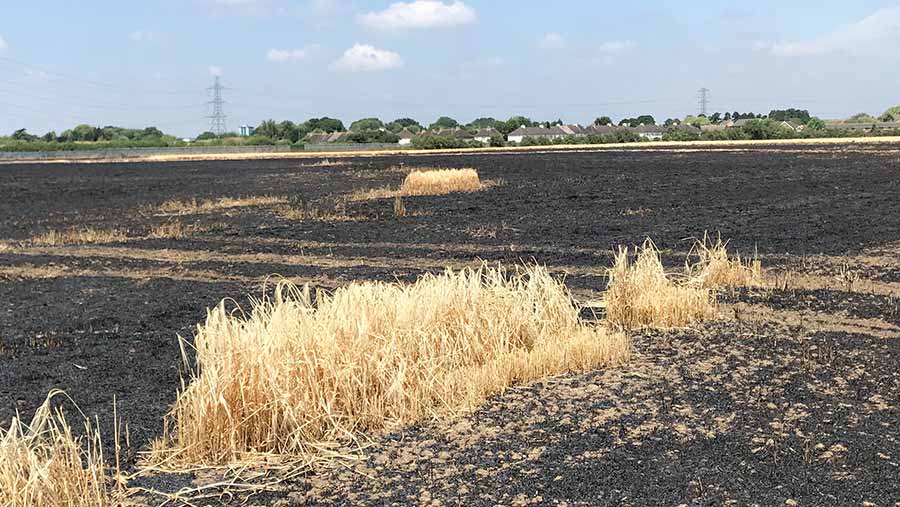 Mr Rayner strongly believes that growers in the UK should follow the example set by farmers in southern Australia by halting harvest in certain conditions.

A voluntary code of practice prevents farmers harvesting in conditions conducive to fire – a combination of high temperatures, humidity and windspeed.

“While we should be covered by the insurance, and I hope they will be fair, insurers might not be so willing to insure farmers if there are many more fires,” he says, adding that damage to wildlife is irreparable.

“We leave space for ground-nesting birds here – lapwings. How many of them have been hurt? Trees that have been in my family for hundreds of years have been lost too.”

“I had just sold it for £138/t the hour before. I’m kicking myself because we could have cut it on Monday, but then we could have had men in the field and it would have been worse.”

As the deputy mayor of Windsor, Mr Rayner believes the fire brigade should be having more contact with their local community.

“I’m a councillor and I don’t know who my local fire officer is anymore. Next year I want to meet up with the fire brigade over the winter and agree access routes.”

He also advises anybody who finds themselves fighting a crop fire to be aware where everyone is working and to choose a side of the fire and stay on it.

“I was busy trying to build another firebreak, but got cornered by the fire against the hedge and my only way out was to go through it and onto the burnt land.

“I couldn’t see for 30m, the engine started to fail as it wasn’t drawing in any oxygen – I wouldn’t do that again.

“There could have been firemen or any of my workers in the smoke and I wouldn’t have seen them, it was very dangerous.” 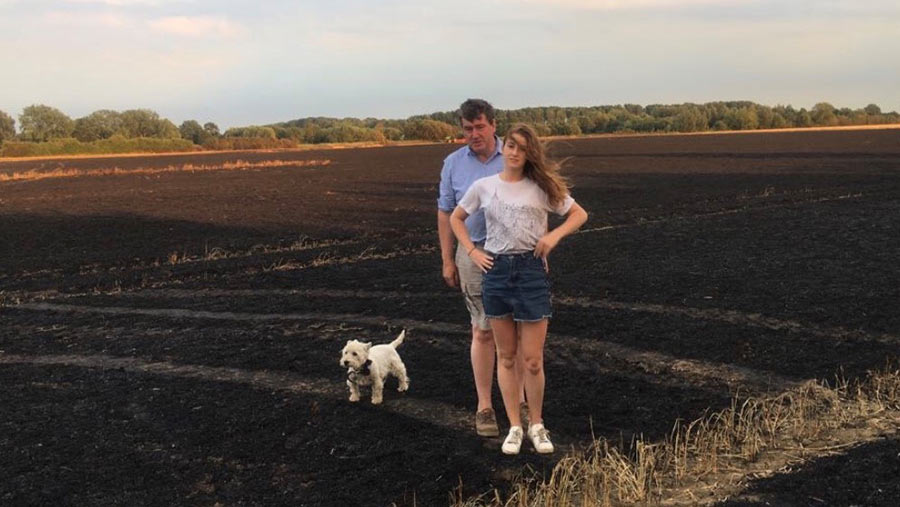 Farmers are being advised to take extra precautions as the risk of fire increases as crops ripen and the long run of hot, dry weather continues across much of the country.

All vehicles involved in the harvest campaign should have checked fire extinguishers on board, especially combines, and growers are advised to put firebreaks around fields as soon as they are harvested.

Rural insurer NFU Mutual’s rural affairs specialist Tim Price says briefing all family members and staff on evacuation and fire-fighting plans is essential, and removing chaff, tending to any oil or fuel leaks and replacing worn bearings are key maintenance checks to be carrying out on combines.

He also advises farmers to invite their local fire and rescue service to visit to check water supplies and access routes.

“If a fire does occur, the first priority is to ensure people and livestock are safe.

“However, with training and the right sort of fire extinguishers in place, it is often possible for farmers to tackle a small fire and prevent it turning into a major blaze without putting themselves at risk.”

At harvest, to reduce the risk of fire:

If a fire breaks out: