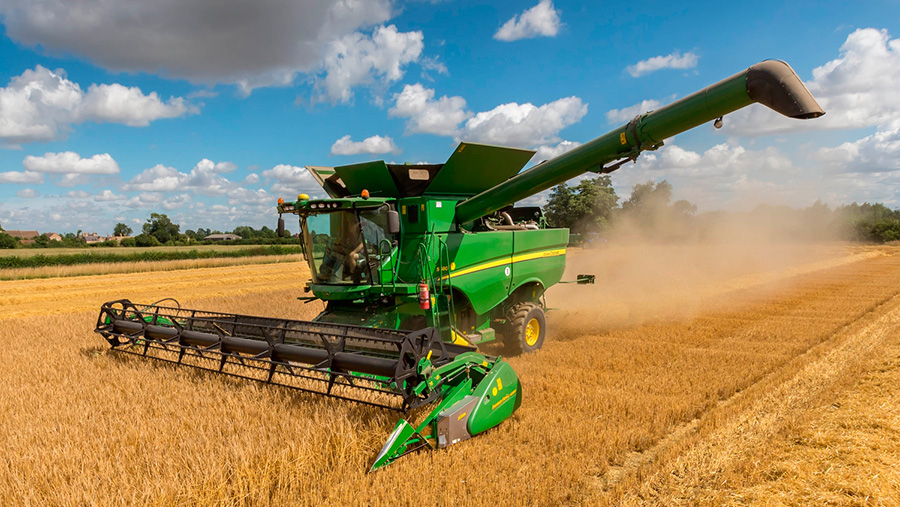 Combines started rolling at the end of last week as winter barley crops were cut in Norfolk and Dorset with early yields looking reasonably good although quality appeared low.

With unreliable harvest weather, cutting was sporadic over the weekend and from a scattering of results specific weight quality was disappointing with some crops below 60kg/hl.

Norfolk grower Michael Dennis started cutting the six-row winter barley feed variety Sequel on Friday (July 8) with yields estimated at 7.5t/ha, and grain coming off the combine at a moisture level of 14%.

He cut 6ha on Friday and Sunday, with another 28ha still to go at his farm and contracting business at Kings Row Farm, North Pickenham, about three miles south-east of Swaffham.

“The crop has looked good but the weather has been rubbish,” he tells Farmers Weekly.

All grain grown is fed through the farm’s pig unit, so there was little information on specific weights.

Further south, Dorset grower Calvin Hooper also started harvesting on Friday with yields at about 8t/ha at 15% moisture, but quality was lower than expected.

Specific weight was coming in at 57kg/hl against a more normal 63kg/hl, as the pinched grain dried quickly causing harvest to come a little earlier than normal.

The UK winter barley area is estimated to be down 4% this season at 424,000ha, reflecting a swing toward spring cropping, with the area down to spring barley and spring pulses expected to have risen.