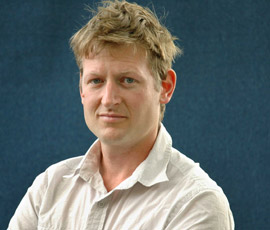 An award-winning environmentalist says he has received hate mail since speaking in favour of GM crops at the Oxford Farming Conference.

Abusive messages were sent to environmental activist Mark Lynas, who once spent several years ripping up GM crops, after he told conference delegates he was now in favour of the technology.

Mr Lynas told delegates he regretted starting the anti-GM crop movement during the 1990s – demonising a technology he now believed could and should benefit the environment.

His comments have infuriated GM opponents.

“The GM debate is finished,” Mr Lynas said, adding that farmers should be free to grow GM crops, which could help feed the world’s poor.

“We don’t need to continue to discuss it. You are more likely to get hit by an asteroid than to get hurt by GM food.”

The conference speech by Mr Lynas has been downloaded more than 130,000 times in the four days since he delivered it on Thursday (3 January).

But it angered environmentalists who remain opposed to GM crops – some of whom have pilloried Mr Lynas via email and social media, including Twitter.

One Twitter message was sent by the prominent anti-GM campaigner Vandana Shiva. It said: “Saying farmers should be free to grow GMOs, which can contaminate organic farms, is like saying rapists should have freedom to rape.”

Mr Lynas replied: “Comparing me with rapists is disgusting and offensive. You are a reactionary fraud and an enemy of the poor.”

Mr Lynas said he refused to be intimidated by the emails he had received. Supportive messages far outnumbered those criticising his conversion to GM crops, he added.

But he warned that he was prepared to publish some of the hate mail online – including the names and computer addresses of those who sent it.

“I don’t want to play the victim here – I couldn’t care less about the nutters really.”

He added: “To everyone sending me hate mail: I may post your messages, emails and IPs in the public domain. Just so you know.”

The speech has been criticised by the pro-organic Soil Association – although there is no suggestion that the organisation is behind any of the abusive messages.

But “banging on about GM crops” was a “red herring,” said Mr Macmillan, who also criticised pro-GM comments made at the conference by DEFRA secretary Owen Paterson.

“Farmers and the public have been promised the earth on GM yet the results to date have been poor,” said Mr Macmillan.

“The UK government’s own farm-scale experiment showed that overall the GM crops were worse for British wildlife.”

US government figures showed that pesticide use had increased since GM crops have been grown there because superweeds and resistant insects have multiplied, Mr Macmillan claimed.

“Lynas, Paterson and other GM enthusiasts must beware of opening floodgates to real problems like this,” he added.

Farmers should be free to grow GMs