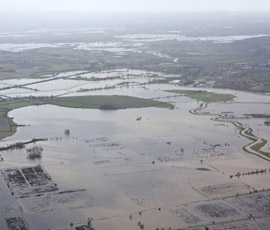 River dredging is “top of the agenda” in the battle to prevent flooding, according to DEFRA farm minister David Heath.

Mr Heath was speaking in Somerset, where flooding left thousands of hectares of land under water for months in 2012.

The minister’s views contradicted a statement made by the Environment Agency in April that said securing EU funding for consultants was the way to stop flooding, rather than clearing waterways.

But Mr Heath told visitors to the Royal Bath and West Show that he would do everything he could to get rivers dredged on the Somerset Levels to reduce the risk of flooding.

“Dredging has to top the agenda. We have to allow the drainage channels to do the job they were designed to do, and that means clearing them,” he said.

“I hope we shall get to a point where the rivers Parrett and the Tone are dredged and maintained properly.

“We have got to do something to give ourselves a chance in future of getting that water away before it becomes a cycle of problems, with land that becomes unusable.”

The Country Land and Business Association welcomed the pledge.

CLA south-west regional director John Mortimer said: “It’s clear these main rivers are where the problem is, because they are significantly below their carrying capacity.”