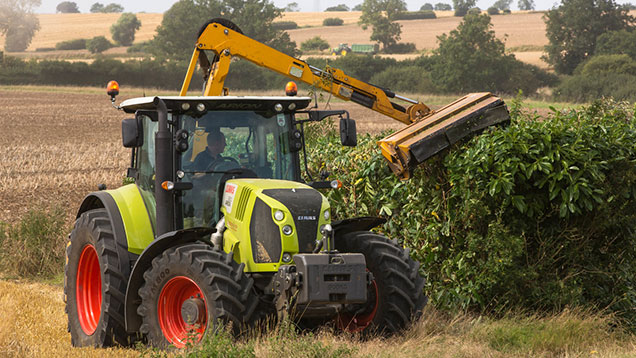 Farm contractors have urged Defra to ease the hedgecutting ban and allow hedges on arable land to be trimmed in August.

The ban, which was introduced in England last year as part of an EU directive to protect nesting birds, has proved to be deeply unpopular with contractors, who say they are losing thousands of pounds in income.

Defra offered farmers the chance to apply for a derogation to allow them to cut hedges in August, especially for those intending to drill oilseed rape or temporary grass.

But agricultural contractors say the derogation does not go far enough to cover those who feel they are being unfairly penalised by the ban.

Instead they have urged Defra to reinstate the rules and allow everyone to cut hedges in August amid claims the ban is having little effect on bird numbers.

The six-month hedgecutting ban for 2016 will come into force on Tuesday 1 March and last until 1 September.

Any farmers or landowners who are caught cutting hedges around arable land during this period without a derogation face penalties under cross-compliance rules and possible reductions in their single farm payment.

Hedging contractor Robert Rutt, who trims about 2,630ha in the Northamptonshire/Leicestershire/Rutland area, said the ban had had a “horrendous” effect on his income in 2015.

“This has been a real thorn in my side. We would normally follow the combines round and cut hedges on arable land in August,” said Mr Rutt.

“When it came round to 1 September, we had so much rain we couldn’t get on the land to cut the hedges. I lost a whole month’s work, between £6,000 and £8,000. It’s not just me who lost out, but hundreds of contractors up and down the country.”

Emma McClarkin, Conservative MEP for the East Midlands, wrote to Defra secretary Liz Truss at the end of January on behalf of Mr Rutt, calling for a review of the hedgecutting ban.

In her letter, Ms McClarkin wrote: “Mr Rutt, as a contractor, suffers a shortfall in his income by one month due to the current hedgecutting season.

“As a solution to this, he proposes that this time period is taken back a month and as such the date would be 1 August for arable and 1 September for all grassland.

“I therefore seek clarification as to whether this time period would fit within the current EU rules under derogation (EU) 1306/2013 and the requirements under Article 5 of the Birds Directive.”

Mr Rutt added: “Defra is being led by the RSPB, which is adamant and naïve, in my opinion, to think that birds only nest in hedges that are overgrown.

“They don’t. They nest in trimmed hedges that are nicely cut when they are in leaf. These offer the conditions for the birds to go in. They nest in there and it keeps them safe from raptors.

“If you have a hedge that is overgrown, you might get the odd woodpigeon nesting in there, but little birds don’t.”

Suffolk farm contractor Ken Hutchison, who runs a team, based near Newmarket, that trims hedges on 16,200ha of land, said: “The only birds that nest in the hedges in August are pigeons and they are vermin to my mind.

“You never come across birds in hedges when you cut them in August. To lose a month [August], the best time of year and the most compact for soil conditions, is unfair.

“Farmers have to be conscious of compaction with the Soil Directive. It makes it difficult to do the work when it is so wet. It has been nearly impossible to catch up with the work this winter.

“Ironically, I cannot trim my hedges after 1 March, but I can carry on laying hedges and coppicing until 30 April. It’s nonsensical.

A spokesman for the RSPB said: “A number of birds are still nesting in August, including a few red-listed species which have declined by more than 50% in recent decades, such as the yellowhammer and turtledove.

“The RSPB acknowledges this can be challenging for farmers who grow crops such as oilseed rape that are sown early, and suggest that rotational hedgecutting can be used to leave such hedges uncut in that cropping year.

“Hedges only cut every two to three years are better for producing flowers and berries that support pollinators and other wildlife.”

Defra said it had no plans to change the hedgecutting dates this season, but derogations would again be available to cut hedges around land intended sowing oilseed rape or temporary grass.

A spokeswoman said: “We appreciate that the new cutting dates mean by necessity that practices must change and that they can cause difficulties for both farmers and contractors; however, given the evidence we have on bird breeding and rearing seasons in England there is no scope to make changes.”

Farmers wanting to apply for a derogation can contact the Defra rural services helpline on 03000 200 301, email ruralpayments@defra.gsi.gov.uk, or write to the Rural Payments Agency at PO Box 352, Worksop S80 9FG.