Confused cannabis users may have been arrested for stealing hemp crops in the past, but the crop could be a more common sight in the countryside if one businessman has his way.

Mike Duckett knows a lot about hemp  – Pliny, for example, he says, wrote the first agronomy guide in AD100.

But even he admits the crop, which is pretty much the same as cannabis but without the hallucinogenic effects, has had a bit of a chequered history with UK farmers.

In its hey day, growing hemp was even made compulsory by Henry VIII  to provide the rigging and ropes for his navy.

But a decline in traditional products, a 65-year ban on UK production followed by failed growing schemes, coupled with harvesting and handling problems, has seen modern production dwindle to a small number of committed growers.

All that, however, could be about to change as the use of hemp-based products bounces back, says Mr Duckett.

Its mix of Omega 3, 6 and 9 fatty acids is supposed to be closest to what occurs naturally in the body – but the real potential lies in its industrial uses, reckons Mr Duckett.

The hemp plant has two constituents, the outer fibre and the woody core or “shiv”. Both are increasingly in demand following a rise in environmental awareness, especially worries over global warming.

Hemp fibre is being used in the automotive sector for the manufacture of recyclable door panels and other parts, while Hemcrete, a breathable mix of shiv and lime,  is used as an energy-efficient building material that can be sprayed onto a wooden frame. 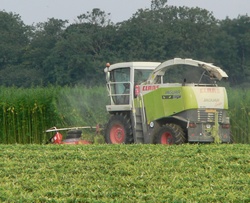 “One hectare of hemp is enough for one house,” according to Mr Duckett, who says the material is comparable in cost to concrete, but far more environmentally friendly.

Everybody is aiming to be carbon neutral these days and Hemcrete fits the bill because all the carbon dioxide used by the hemp plant during photosynthesis is locked away, he says.

“You could even say it is carbon negative because it absorbs even more carbon dioxide during its lifetime,” says Mr Duckett.

“If you built every new house in the UK from Hemcrete, the government could meet its target for reducing carbon dioxide emissions.”

As managing director of Essex-based Hemcore, the UK’s primary industrial hemp processor, Mr Duckett obviously has a vested interest in promoting the crop, but his arguments sound convincing and the company is investing heavily to take advantage of the new opportunities.

Hemcore’s existing factory processes 4500t of hemp straw a year, but a new £3.6m factory, which will be able to handle 50,000t, is set to open in Halesworth, Suffolk, next summer.

All this sounds excellent news, but if demand takes off as expected far more farmers will be needed to champion hemp.

With wheat prices rocketing, what is there to tempt farmers to take a chance with such an unusual crop?

Actually, quite a lot, claims Mr Duckett. “We don’t expect farmers to grow it instead of wheat, but we do believe it makes an excellent break crop.

He says an estimated 2008 gross margin of £508/ha (£205/acre) before haulage compares well with other break crops, and once the hemp is established it requires no chemicals and is ready to harvest in about four months.

Drilling into a moist seedbed – from April to early June – and protecting the seedlings from pigeons are the critical factors in hemp establishment, after that it’s just a case of watching it grow – up to four cm a day. Nitrogen requirement is about 100kg/ha (40kg/acre)

Because the plant is so vigorous it suppresses weeds and is excellent at reducing blackgrass pressure on susceptible farms, especially if it is grown for two years in a row, says Mr Duckett.

The use of foragers and square balers has made harvesting easier and improvements in the manufacturing process mean the crop no longer needs to be left to ret (when the fibres start to separate) in the field before baling.

Hemcore is principally looking for farmers close to its East Anglian base, but says it will accept crops from all over the country.

Mr Duckett leaves me with one final fact. During the Napoleonic wars hemp was in such demand farmers were paid the equivalent of £8000/acre.

He can’t offer that today, but hemp looks like an option that’s at least worth considering.