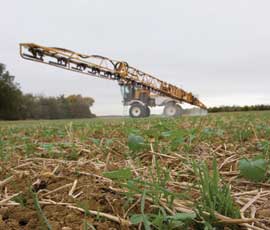 Oilseed rape growers will have a new tool in the fight against annual grassweeds this autumn after active ingredient clethodim received full UK approval.

Branded as Centurion Max, clethodim is an ACCase inhibitor, a group of actives that are affected by target site resistance in blackgrass.

However, the herbicide has been proven to be more effective than leading ACCase inhibitors tepraloxydim (Aramo) and cycloxydim (Laser), explains Stephen Moss of Rothamsted Research.

“There are target site mutations out there that do reduce the efficacy of clethodim, but at present they seem to be uncommon in the UK,” he adds.

For that reason Dr Moss says that even growers that have known ACCase-resistant blackgrass populations shouldn’t be put off using the product, as it can still improve control.

But he cautions that target site mutations exist that can reduce the efficacy of the product, so it needs to be used wisely.

“Places such as Australia have been using clethodim for many years and now have resistant annual ryegrass populations, so it’s not immune,” says Dr Moss.

Oilseed rape growers will often be using Centurion Max in sequences with the residual herbicides Kerb and Crawler, as a straight swap or to compliment other ACCase options.

This will take the resistance pressure off the product, but will also make it difficult to assess how effective Centurion Max is in a particular blackgrass population.

“In an ideal world, growers should try the product on its own over a small area to assess its efficacy against their own blackgrass populations, particularly where resistance is known,” Dr Moss points out.

“If Aramo is a poor performer on your farm, then Centurion Max could give you a welcome boost, so it’s a very useful added weapon in the armoury.”

Centurion Max is marketed by Interfarm UK and their technical manager David Stormonth says that he would prefer growers to use the product before Kerb and Crawler.

These are the two most effective blackgrass killers in any crop, with no reported incidence of resistance, so if used after clethodim will clear up blackgrass that the new product doesn’t kill.

“This will reduce the chance of resistance building up and prolong the life of the product, so growers and advisors need to ensure that it is part of a robust programme,” says Dr Stormonth.

Independent crop consultant Sean Sparling thinks that Centurion Max will be widely used in oilseed rape crops this autumn after a season where Aramo and Laser have performed poorly.

He says that with the hiatus in new chemistry for the control of blackgrass in cereal crops, cleaning crops such as oilseed rape are becoming evermore critical.

With a new product to strengthen the ability to get on top of tough-to-control blackgrass populations, demand will be high so he is planning to get orders in early.

“I see Centurion Max as a straight swap for Aramo in most cases. Clethodim is not a knight in shining armour, but it is certainly going to give the armour a bit of a polish,” says Mr Sparling.

Label restrictions mean that only one “fop” or one “dim” can be used against a single target weed during the season.

In addition to Centurion Max bolstering blackgrass control in oilseed rape, Dow AgroScience has added another active to its post-emergence residual herbicide KerbFlo to produce AsroKerb.

The active aminopyralid had been added to propyzamide to give the product increased activity on poppy and mayweed where those weeds are a problem.

To find out more about this new product visit www.fwi.co.uk/astrokerb

It is therefore likely that “fop” products such as Falcon of Fusilade will be used earlier to take out cereal volunteers and Centurion Max as a “dim” applied later to hit blackgrass and annual meadowgrass.

Mr Sparling notes that Centurion Max can be mixed with Kerb products, but urges growers to consider using the product on its own if the autumn is mild enough to delay propyzamide applications.

“Propyzamide needs to have soil temperatures of 9C and falling, but graminicides such as clethodim need actively growing targets to be taken up.

“It would therefore be better to apply it in isolation and hold the Kerb back until December or January,” he adds.

Clethodim is also approved for use in sugar beet, adding improved blackgrass control in a crop where it is becoming an escalating problem.

“Again, it’s a better option than Aramo or Laser and added to the other cultural and chemical measures will be a big help,” concludes Mr Sparling.

Mapping out an aerial assault on blackgrass