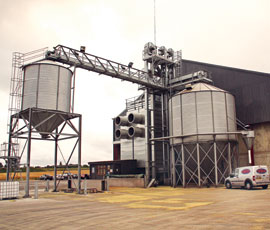 The new HGCA Grain Storage Guide currently being sent to growers takes on a new bold image and, for the first time, adopts a risk-based approach similar to the Hazard Analysis and Critical Control Points (HACCP) system widely used in food and feed safety systems.

Stewart Vernon, who farms and has a grain drying and storage business at Coatsay Moor Farm near Darlington, finds the third edition has a much improved format that simplifies his job at all stages from store preparation through to dispatch.

Rather than cover topics, such as temperature and cooling, in isolation as before, the comprehensive advice is presented in relation to each process in the system. For instance, there are sections for temporary holding and long-term storage.

But the biggest change is that it promotes best practice through risk management using the commonly used food and feed safety system, HACCP.

Mr Vernon, who stores up to 9,000t of grain a year for 30 different growers on top of his arable output across 150ha, believes this offers a huge benefit when it comes to showing due diligence and traceability.

“HACCP, though not a legal requirement, is a sound farm assurance scheme many of us use to make judgements. Basing the guide on HACCP principles saves us having to find out for ourselves the hazards and control points for best storage practice. This approach will undoubtedly reduce losses and keep UK grain ahead of the competition.”

He sees the new three-star risk ratings and necessary action as a sound system with which to prioritise jobs when under pressure. And the guide can point him in the direction of further information on all aspects of storage where needed.

That’s not to say this edition isn’t detailed enough, he stresses. In the eight years since the last one, research has taught us much about mycotoxins, mites, monitoring, and more besides.

There are sections covering climate change and suggested cooling strategies of the future. Consensus is that cooling targets will be more difficult, but still possible to achieve, though checking of critical limits must be stepped up.

Integrated pest management takes greater prominence. Levels of insecticide resistance in different pest populations have changed over recent seasons, and there is new advice on how to minimise the risk using an integrated approach involving cooling and drying.

There is no mention of specific pesticide treatments. Mr Vernon sees this as a sensible move since products come and go.

Oilseed storage advice is interspersed throughout, and comprehensive enough, he believes.

“At first glance you may think the HACCP approach is just another chore to work through, but it actually fits with what we are already doing,” he says.