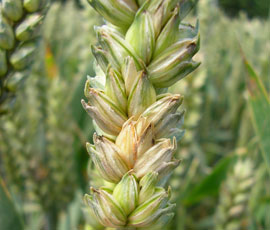 As a result of his microscopic studies at Rothamsted Research, HGCA is likely to advise growers to apply fungicides earlier than previously when conditions favour the disease.

“Discussions are ongoing on how to use this information,” said Mr Brown.

Fusarium and the toxins it created were a growing problem, he noted. On average, 39% of wheat fields were now infected – the increase in maize growing being partially to blame.

“In 2008, the last bad year, 11% of UK wheat was rejected for human consumption because of mycotoxin contamination.”

His work on fusarium-inoculated ears, using light and electron microscopes, identified masses of fungal hyphae within the wheat rachis – evidence of the rapid but otherwise symptomless spread of the toxin-producing fungus.

Within five days of infection, up to a third of the ear could have been colonised, he said.

“This could explain the poor correlation between fusarium symptoms on the ear and mycotoxin levels in the harvested grain.”