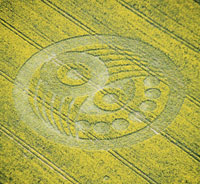 Philip Simmonds’ job managing a Wiltshire farm took a futuristic turn when he discovered an unexplained crop circle in his field of oilseed rape.

When I first noticed the 72m diameter crop circle on the Tuesday after the spring bank holiday my initial reaction was one of “I hope no one notices and perhaps it will go away”. I couldn’t have been more wrong.

Our 623ha farm lies in the shadow of a spectacular Iron Age hill fort in Salisbury – an English Heritage site known as Old Sarum. Within 24 hours of its discovery the circle was photographed by a passer-by on the ramparts who posted it on a website for crop circle enthusiasts, and so it all began.

Leading the vanguard was a party from Holland who drove straight over to view what they described as the “first circle of the 2010 season”.

Somebody from English Heritage alerted me to the group after noticing them in the crop from a vantage point on the monument and, irritated by the intrusion, I prepared to confront them.

Views were exchanged, apologies accepted, the visitors retreated and normality resumed, but the peace was short lived.

That same evening an eight-strong Dutch film crew arrived – complete with helicopter – and the next morning an email arrived in my inbox from a group of Californian enthusiasts who wanted to come and film the circle. They even asked me if they could create another design in the field to demonstrate how it was done.

Talk of location fees was softening my annoyance, but we couldn’t seem to come to an agreement. It was getting absurd and something had to be done.

Although actual crop loss from creating the circle was minimal (the stems were not actually broken, merely bent) I was getting more and more concerned about the hordes of people wandering into my farm trampling crops, and here was my dilemma: Should I destroy the circle so there is no reason for visitors to come, or should I just resign myself to the attention and charge an admission fee to mitigate the loss?

I chose the latter. A fence was hastily erected and a path was cut into the crop for access. I also put up a poster and an honesty box asking visitors for a £5 donation to enter the circle, and over the next two weeks interest in the site exploded.

I met people from Holland, Belgium, France, Austria, Switzerland, the Czech Republic and Germany and, on one memorable occasion, a party of 20 Japanese tourists each wearing the latest creation from Nikon. A photo even made it in the Daily Telegraph.

Some enthusiasts have brought video cameras, crystals, divining rods and pendulums. Some have laid down on the ground, meditated, sung and prayed but, for all their efforts and enthusiasm, two questions remain unanswered.

First, what is it? Depending on your viewpoint the design could symbolise a flying eye or a cosmic band encircling the earth surrounded by the seven heavenly bodies, the sun and earth.

It may represent a star gate to other dimensions, a three-dimensional diamond ring to herald Venus disappearing behind the moon on 16 May, or those who are more mathematically inclined may claim that angles within the circle are from phi or the golden ratio.

Second, how was it made? We didn’t find any pegs, planks or string, there are no obvious signs of trampling and people living in former farmworkers’ cottages nearby didn’t see or hear anything unusual overnight. Some of our more seasoned enthusiasts told me it was definitely not man-made – after all, how can the plants bend at 90° with no sign of breakage or abrasions on the stems?

There is certainly no shortage of alternative theories – plasma vortexes channelling energies from the solar system, magnetism, cosmic messages; there was even talk of captured alien spacecraft stolen from a hangar at Boscombe Down.

It’s true I would rather it had appeared on someone else’s land, but the design is very well made and I’m aware that crop circles created in cereals can be far more destructive than this one in oilseed rape. In the end there was only one acre of minimal damage to stems, and even those have turned up to the light and continued to flower and set seed.

It’s also attracted around 100 paying visitors to the farm, and every single one has been grateful for being able to enter the circle without the worry of being assaulted by a shout of “gerroffmyland” from an angry landowner. As a whole visitors have been incredibly respectful, some even carrying the “crop circle enthusiasts’ code of conduct”.

Ultimately I don’t know what caused the circle to appear in our field but, whatever the answer, all of the visitors to our site had unshakeable beliefs in their chosen theory. If there’s one thing I can be sure about, it’s that if a design appears in one of my fields in the future, it will not go unnoticed.

• On the forums – Are crop circles a phenomenon or just a nuisance? Are they the work of clever hoaxers or extra terrestrials? Join the debate on our forums.