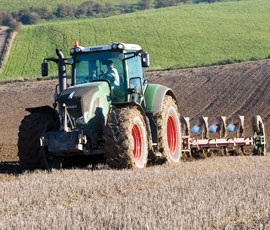 Harvest has been hideous at Wicklesham Farm, Faringdon, Oxfordshire, with Tom Allen-Stevens bemoaning poor yields and dreadful quality across the board.

“I reckon wheat yields will be about 20% down, and bushel weights haven’t lifted out of the low 60s,” he said.

“Phil Kinch, who farms the whole farm on contract and has done an excellent job for the past 14 years, started combining wheat relatively early, about a month ago.

“But when it became obvious that the 66ha of Gallant, grown on the farm’s heavier and brashy soils, wasn’t going to make the grade for feed, let alone milling, I think he packed up his combine and left in disgust – off to find some better wheat elsewhere.”

The 50ha of Cabernet oilseed rape, grown on mainly light sands and gravels, yielded 3.5t/ha – 1t/ha below last year. “We were quite happy with that,” said Mr Allen-Stevens.

“There are many terms you can use for a difficult harvest – snatching it in between the showers, the frustrations as you fight to bring the crop in.

“This harvest has been desperate and depressing on every front – it hasn’t been a challenge, it’s been a torture.

“And that heap of rubbish sitting in my barn hasn’t been a reward – it’s a smack in the face after all that care and attention to detail we went to over the past 12 months,” he added.

“Anyway, it’s now all in. Apart from the great scars where the combine has taken gouges out of my fields, there are just sorry memories of a hideous year I’d rather put behind me.

“The heavens can open and it can throw it down for all it wants now, as long as it doesn’t stop us putting in next year’s crop.”