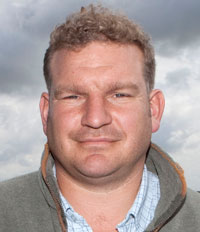 David Lemon puts his 5.2t/ha yield in last year’s crop of Cabernet oilseed rape at his Pewsey Vale farm, Wiltshire, down to a firm focus on plant population and managing the canopy.

He follows the Masstock system closely across the 1600ha of greensand, chalk and clay he farms in the Pewsey Vale. “It’s made a huge difference. Four years ago I thought 4t/ha a good yield, but now we’re going from strength to strength.”

A Simba SL 700 subsoiler, discs and press follows the combine into the barley stubble and a Versatilth tine cultivator levelling board and press makes the seedbed. “A fine crumb structure is hugely important.”

Aiming for the last week in August, all 360ha of oilseed rape are drilled with an 8m Horsch Pronto unit mounted on a Bateman in just three and a half days. “Once conditions are right we go hammer and tongs.”

This is quickly followed by the pre-emergence herbicide and then 25kgN/ha in liquid form to get the roots going. The seed has a Take Off dressing, containing oxy-pyroglutamate and a nutrient complex.

With a target hybrid plant population of 30/sq m or 40 conventional plants/sq m, Mr Lemon drills at 30 and 40-45 seeds/sq m, repectively. “I up it a bit if it’s knobbly and can tolerate some losses – I can still get a 5t/ha crop from 25 plants/sq m.”

Ground cover is important over the winter to keep pigeon damage to a minimum. “But I try to restrict the volume of leaf so the light can get into the canopy in the spring and push yield. Caramba (metconazole) in the autumn suppresses the growth but encourages root development.”

At the end of January he meticulously measures green area index by cutting and measuring sample squares of crop. This is confirmed by the N-Sensor, and N-min samples are also taken to get an initial nitrogen dressing applied in the second week in February. This typically varies from 10-65kg/ha N, with all 100kg/ha of sulphur applied at the same time.

The second dressing four weeks later brings total N available to the crop up to the target 175kg/ha, also variably applied. The final dressing builds the yield, with 60kg/ha N applied per tonne expected over 3.5t/ha.

“I know it works because I made a mistake with some fields last year, and wasn’t going for the 175kg/ha N target, although I applied the right amount overall. Where I under-applied for the canopy by 10%, I was under yield by 10%.”