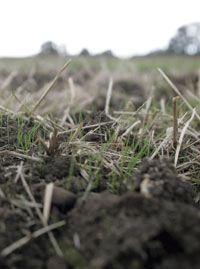 HGCA-funded research showing dormancy in blackgrass seed this autumn is likely to be high has confounded many arable advisers.

Mostly warm, dry weather during the Wimbledon fortnight in late June and early July when blackgrass seed matures has led to low dormancy in previous years.

But the average germination of the 37 samples tested from around the country this season was just 23%, similar to the levels seen in 2004 and 2007, when the overriding weather was cold and wet.

The prediction is that blackgrass germination will be slow, even with adequate seed-bed moisture, potentially reducing the usefulness of stale seed-beds. In low dormancy years seeds germinate readily when moisture is available, which helps growers remove blackgrass before crops are drilled.

This year’s weather from mid-June to mid-July was the most variable of all the years studied, Sarah Cook, project leader from ADAS, admits. “Generally the weather has been slightly warmer than the long-term average with a lower number of rain days, but there were 50% of weather stations wetter than average and 50% drier.”

That led to there being more variation in the middle 50% of the samples than is usually seen, says colleague James Clarke.

More analysis of the weather during mid-June to mid-July is likely to now be undertaken to see whether greater understanding of the result can be achieved, Mr Clarke adds. “The plant is certainly a greater assimilator of information than we are.”

Early indications had prompted HGCA to suggest this year could be a low dormancy year in a news release asking for blackgrass seed samples in June, which combined with advisers memories of June weather, has left many surprised by the findings.

“Count me in as one of the confused,” Clare Bend of Masstock says. “My memory of June was that it wasn’t half bad, and the last time we had a dry, warm June dormancy was low.

“Arguably seed maturation might have been later this year, with later plantings, so maybe the weather in July had more effect.

“I’d also be interested in knowing where the majority of samples came from.”

Despite the finding she doesn’t think plans should change, particularly when it comes to stale seed-beds. “Growers should do everything possible to get blackgrass germinating [before drilling]. Even if it is only 23% germination it is still worth doing.

“After that you need to get a competitive crop, put the right variety into the worst fields, etc., and if you look at our trials from last year, when dormancy was high, the best time to spray Atlantis was still in November, as it has been every other year.”