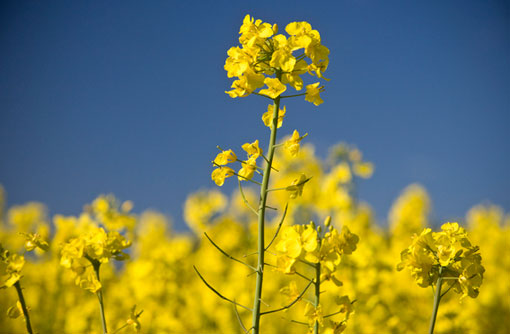 However good subsequent management may be, if seed is muddled in with little thought, a crop of oilseed rape will never make up for lost ground.

Care taken at the early stages, especially over cultivations and drilling, followed by timely early agronomy, is crucial for any grower aspiring to 5t/ha yields.

For Steve Cook of Hampshire Arable Systems the process starts even earlier. “Rotation should be the starting point,” he says. “Oilseed rape should be grown no more than one year in four, preferably five. Short-term economics look attractive, but there is a definite yield penalty. Eventually growers will also run into club root problems.”

In his view, management is more important than variety choice when chasing big yields. His main advice is to choose shorter, stiffer, lower-biomass varieties for ease of combining and lower harvest losses, with good disease resistance. “I do prefer conventional varieties as you can clean home-saved seed hard and get bigger, more vigorous seed.

“In the right situation with the right management all varieties on the Recommended List can produce 5t/ha. My highest yielding field last season was Castille, which gave 6t/ha. You wouldn’t think it possible, but it was grown correctly on a wide rotation.”

Cruiser or Modesto are both good seed treatments, the former favoured on higher, cooler ground which can slow development and leave seedlings more prone to downy mildew.

A well-structured, firm seed-bed that gives good seed/soil contact and allows roots to explore the subsoil fully is crucial. Mr Cook advises, “Establish the crop well and 5t/ha is relatively easy. There is no prescriptive system – the most important thing is a good operator. Whatever works for the farm is fine as long as it removes compaction.”

Drilling during the last week of August to the first of week September is ideal in the South; a fortnight earlier in the North. “Aim to sow 60-80 seeds/sq m for conventionals and 30-40 for hybrids. As a rule of thumb sow 5ha from a 4ha pack.”

A near tripling of oilseed prices in a few years has seen oilseed rape become the cornerstone of many arable rotations, with farmers prepared to invest money in better varieties and improved establishment, says David Leaper, Openfield’s arable technical manager.

“Farmers are spending on the latest technology – hybrids, new pure-lines and nutrient seed treatments. They are creating a platform on which they can build yield.”

Variety breeding has moved on apace, Mr Leaper maintains. “Hybrids are driving growth and speeding the introduction of new traits – they are a tool to deliver innovation relatively quickly, including improved oil content and the widespread uptake of the RM7 stem canker resistance gene, and they bring a lot of genetic diversity.”

While investing in such technology makes sense, so does spreading risk, and he advises farmers to grow more than one variety to widen the drilling window and spread harvest.

“The drilling window is fairly narrow compared with cereals – from mid-late August to early September in the south, a couple of weeks earlier in the north. A mix of varieties including medium developers, like DK Extrovert, a high-performing, solid variety and Avatar, the highest gross output variety in the Recommended Lists, plus Diffusion, which would suit an earlier drilling slot, and DK Expower, which is relatively fast developing, would provide a good range to suit many situations.”

Many leading growers have adopted nutrient seed dressings in addition to standard treatments. “It is clear that dressings like Matrix, Seedlife and Take-off together with a small N application (30kg/ha) have an additive effect which tends to really show under tougher conditions.”

Using the correct seed rate is vital, says Mr Leaper. “It is very difficult to be prescriptive – seasons are different and what suits one type of land and establishment system may not suit another. Don’t get hung up on detail – an appropriate drilling date is much more important and the crop is very good at compensating.”

One factor that often drags yield down is reacting to the previous season, he says. “Too many farmers overreact to what has gone before. The winter of 2010/11 was very cold and some smaller crops failed. So last summer farmers drilled relatively early in August, almost throwing caution to the wind. Crops developed quickly, making spring canopy management very difficult in some cases.

“If something works most of the time, stick with it. No two seasons are ever the same, so managing a crop according to the previous year’s conditions is never the best approach,” Mr Leaper says.

Getting the most from genetics and chemistry

As UK oilseed rape breeding and crop protection leaders, our overriding aim is to help growers maximise the contribution OSR makes to their farming businesses through first class genetics and chemistry and by sharing guidance from specialists and experience from growers.