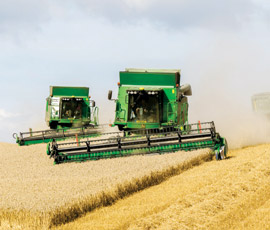 The group, which buys about 1.2m tonnes of milling wheat annually, is reporting good quality grain with the only downside being slightly lower proteins.

“With 60-70% of the harvest complete, the quality of breadmaking wheats is very good this year,” says the company’s head of wheat procurement Gary Sharkey.

He believes the milling industry will be back to “normal” levels of importation at around 15% of its need for use in specialist breads, such as baguettes.

Most milling samples are reaching breadmaking standards of specific weight of 76kg/hl, a Hagberg of more than 250 and a protein of 13%.

Mr Sharkey says there has been a wide spread of protein levels but it was not a major problem, and Hagbergs were averaging over 300 and specific weights close to 80.

“With 60-70% of the harvest complete, the quality of breadmaking wheats is very good this year.”
Gary Sharkey, Rank Hovis’ head of wheat procurement

Last season, Britain become a net importer of wheat for the first time in over a decade with 2.9m tonnes imported, split equally between milling and feed wheat.

This season, the amount of milling wheat from Britain’s biggest importer, Germany, could fall to 300,000-350,000t from the 1m tonnes imported last season, Mr Sharkey says.

Last season, Rank Hovis – which is part of Premier Foods – reflected the industry and had to import about a third of it needs and abandoned its 100% British wheat pledge for its top bread brand Hovis.

Mr Sharkey is predicting an overall wheat crop of about 12m tonnes this season within general trade forecast for a 12-12.6m tonne crop compared with last year’s 13.3m tonnes.

“All of the wheats have yielded well that went in the ground well,” says the co-op’s managing director Philip Darke.

However, with a good quality crop, the milling premium over feed has narrowed to £15/t from more than £25/t a few weeks ago.