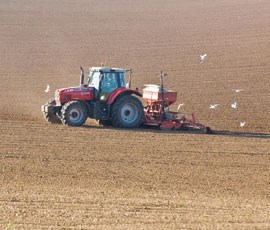 The group, which has farms stretching from just outside Edinburgh down to south Dorset, trimmed the cost of wheat seed by over a quarter, or about £140/t, by using its mobile seed dresser.

Some 500t of winter wheat seed has been processed for its own farms and a further 200t for its member and clients in the autumn of 2012.

“The key advantages are to cut costs, gain security of supply and being able to work with a known quality of seed,” John Hall, Sentry’s farm business advisor, says.

The group has used its seed mobile for the last six seasons across its 20,000ha of predominantly arable land focused largely in East Anglia.

The farming company was formed in 1972 and following a management buyout in 1999 is now largely owned by its employees. It owns no land but farms about 20,000ha made up of nearly 9,000ha of contract farming, 9,000ha of management agreements and 2,500ha of farm business tenancies. The group generally follows a four-year rotation of oilseed rape, winter wheat, a spring break such as peas, beans, linseed or sugar beet and then winter wheat again.

Mr Hall says fusarium was active in the group’s wheat crops, like many others nationwide, and he sought to help control it using a fungicide seed dressing.

Specific weights were low across the board, and cut thousand grain weight in grammes to the low 40s from a more average year of 45-50.

He calculates his wheat seed costs at just above £400/t (see table right) compared with typical C2-certified seed costs at £540/t. Using an average seed rate of 150kg/ha this resulted in a saving of £21/ha. 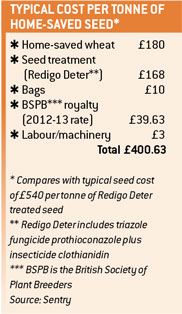 The 700t of winter wheat seed processed was enough to cover 4,660ha for Sentry and its clients, saving them together £98,000.

With a relatively modest first wheat yield of 8t/ha, this could cut £2.60/t off production costs, which Mr Hall says could become more important as input costs rise and if wheat prices fall.

With less expensive seed, it is also an easier decision to go for high seed rates in severe blackgrass situations in an attempt to crowd out the grass weed.

Seed can be saved for one or two years, and Mr Hall says one year is ideal while two is acceptable before the level of impurities become ­a problem.

“It allows us to try a new variety with a bit of new seed and then multiple it up,” Mr Hall says.

Moreover, in a further effort to save seed costs, the group is experimenting with using lower seed rates for the early drilling of wheat on light land.

Farm business manager John Barrett has been drilling winter wheat early in September on light land using a low seed rates of 95kg/ha, and the trials have showed a good yield response.

Around 240t of spring barley was dressed this year and this was particularly useful when the price of C2-certified seed rocketed owing to the big swing to spring cropping.

The group’s Dorset farm manager Richard Peck was able to process 50t of Tipple spring barley seed from over 60t of grain, which had been reduced to feed-quality by poor weather.

I drilled a field but ran short of seed near the end and topped up the drill with some grain I had in the barn. What do I need to do?

If this was grain from your own harvest, simply declare the area sown with top-up seed to BSPB in the usual way. BSPB will then invoice you for the farm-saved seed payment for the variety and area sown. However, if the grain was bought in, perhaps as livestock feed, it would not fall within the farm-saved seed exemption and could not be used for sowing.

Can I have my FSS certified in order to sell or transfer it legitimately?

No, farm-saved seed cannot be certified retrospectively. Certified seed must be produced from an officially entered seed crop, which has been field-inspected by a licenced crop inspector and complies with all legal standards.

I have 5t of farm-saved wheat seed left over, with FSS royalty already paid when it was processed. Can I sell or give it to my neighbour?

If the farm-saved seed is surplus to requirements or cannot be sown, it may be carried over for planting the following year without further royalty payment, although it is advisable to have seed tested prior to planting as the vigour and germination of FSS can deteriorate.

A contractor is now farming my land. Who should make the FSS declaration?

Under most contracting arrangements, the farmer maintains control of his business accounts, which is where the responsibility and accountability for FSS declaration and payment will lie.

A farmer can delegate the responsibility for FSS declaration to a contractor by notifying BSPB, but ultimately the owner of the holding and recipient of the single farm payment is responsible for ensuring compliance on all legal matters.