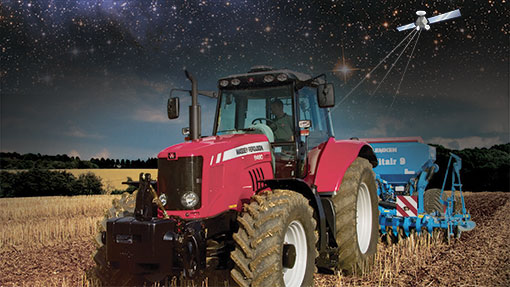 Precision technology is taking on a fresh battle as it helps farmers optimise inputs to feed a growing global population. Caroline Stocks investigates how technology is changing the face of UK farming.

Just a few decades ago, the idea of robots on farms and tractors that drove themselves would have been the stuff of agricultural science fiction.

But now more than half of the UK’s farmland is reportedly farmed using precision technology in some form, and that figure is expected to rise dramatically during the next few years.

For precision farming consultant Ian Beecher-Jones, precision technology is not a new concept.

“Many assume its origins lie with the military, but in fact it goes back as much as 300 years, when farmers were using horses and ploughs,” he says.

“When they noticed areas of different soil texture, they put in hedges or ditches. When we expanded field size and started trying to treat the soil in the same way without taking into account field variations, we were actually taking a step backwards.

“If you think about it that way, precision farming isn’t new, as the principles have long been there. What has changed is the technology.”

From a technological point of view, the real advancements started in the 1980s when global positioning satellites were made available to the public, but the technology has taken a long time to get on to farms.

“The delay has partly been because of the price of technology, but also its reliability in mainstream use,” says Mr Beecher-Jones.

“There were a few early adopters who were willing to pay the price, but for the mass market the perceived benefits and reliability were too much of a risk.”

The turning point came about six years ago when fuel prices started to rise rapidly.

“When high grain prices coincided with fuel prices rising, farmers had more money to spend on trying to cut the costs of inputs,” he says.

“That, combined with improvements in the technology available, is why we saw a rapid increase on farms five or six years ago.”

It is difficult to know exactly how many farmers are using precision technology, but Mr Beecher-Jones says about 60% of the UK’s farmland is farmed using it.

“It can be tough for smaller producers because they can’t afford to do it all – do they choose variable rate applicators or soil mapping technology?”

Regardless of decisions about costs, more and more farmers are going to be using the technology in the future, he says.

“If you are just using GPS for steering a tractor at the moment, the likelihood is that same technology will eventually be used to control your fertiliser spreading. If 50% of your equipment is under guidance technology, it’s fair to say it will go up to 80% across all technology within a few years.”

Mr Beecher-Jones says UK farmers are no further ahead of or behind farmers around the world in terms of their adoption of the technology.

“Wherever you go there is a small percentage of farmers already using it, but the mass market in the middle are only just learning about it and coming to terms with processing all the information precision technology can give you.

GPS is a navigation system made up of a network of 31 satellites that orbit Earth at a height of nearly 30,000km.

It works via a GPS receiver, which picks up signals from four satellites to determine its position.

Placed into orbit by the US Department of Defense in 1973, GPS was originally intended to provide positions to the US military. But in the 1980s, president Ronald Reagan ordered it to be made available for civilian use and it became fully accessible in 1995.

“Where we’ve got to develop is focusing on the problems we have on farms and working out how technology can help us do things more efficiently.”

Many producers, particularly in the livestock sector, are already using technology to simplify and improve their management systems. Poultry producer David Speller uses cameras and microphones to monitor bird behaviour in his 180,000-broiler unit in Chesterfield, Derbyshire.

By collecting real-time data on feed and water consumption, bird temperature and liveweight gain via automated systems, he is instantly alerted to problems in his flock and can make changes to rectify them.

“People might think these systems are expensive, but with the savings you make you can quickly recoup costs,” says Mr Speller.

Simplifying his systems has also enabled him to develop his management so that staff can have more regular hours, which makes working in the sector more appealing.

While poultry and pig units in particular are doing a lot in terms of using technology for environmental management, cattle and sheep producers are doing more work with animal sensors, according to Charlotte Johnston, RASE technical livestock specialist.

“We’re seeing things such as virtual fencing being introduced, which involves an animal wearing a collar and a noise being emitted if it strays into a certain area to bring them back to where they should be,” she says.

“There are lots of different things you could collect data on – for example, putting a collar on an animal to monitor its chewing. If a cow takes one bite, but lots of chews, you know there is plenty of grass in the field.”

The real limit to technology is how farmers use the data they collect, she adds.

“There’s no point collecting the data if you are not going to make use of it, and that applies whether you are using expensive technology or collecting the information manually.

“If you are not putting the data into the right software it’s a waste of time. The software can be expensive and that can put people off as much as the outlay for the hardware technology. But as programs become more common in the market and competition increases, costs will come down,” says Ms Johnston.

For Mr Beecher-Jones, knowing how to make use of the data means that, rather than removing the need for farm staff, technology will make traditional agricultural skills more important than ever.

“People will need to be able to sift through all the information to make decisions in the field,” he adds. “The computer may say ‘yes’, but the weather says ‘no’, so you need to be able to know what the right course of action is.

“It will be even more important to have the agronomic skills and the skills of machinery suppliers to ensure the systems are set up properly and work as well as possible, too.”

As technology becomes cheaper and more reliable, the next stage for UK farming will be to refine the technology it has, Mr Beecher-Jones says.

“In the arable sector we are looking at on-machine sensors, with optical sensors to apply chemicals to weeds. It’s improving the camera technology that’s important and learning how to translate the pictures into useful applications.

“If a machine can sense a problem before the human eye sees it, it can take action sooner. And it’s that fast response that is half the battle on farms.”

Modern farm machinery has been designed with the view that bigger is better, but the next generation of farm technology has to get smaller to allow farmers to become more flexible and efficient.

But pressures such as environmental regulations and reduced inputs meant that simply chasing yields was not a solution, and that smaller, more responsive machinery had to be the next step in machinery design.

“Up to 90% of the energy that goes into cultivation is there to repair the damage of large, heavy machines,” he said. “Very often, large tractors aren’t efficient as they aren’t matched to the task they are designed to carry out, particularly in the UK’s smaller fields.”

In coming years, Prof Blackmore said he expects to see small machines working alongside fewer larger ones, with more emphasis placed on robotics.

“We are not far away from being able to commercialise some robots so we can start bringing them on to farms,” he said.

“Phased harvesting, seeding depth to moisture, permanent planting positions and crop scouting could all be achieved by robots in future, helping farmers drive down inputs and materials.”