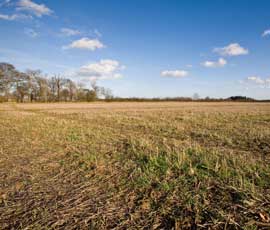 Farmers love to farm”, as the saying goes, so putting aside land for fallowing is a huge decision and not an easy one to make. Guy Poskitt knows better than anyone having had to fallow more than 200ha of his land last year, nearly 10% of the total cropping area.

“It wasn’t an easy choice, but I think it has paid off, particularly looking at the wider picture. Some of our land is very strong and can become extremely wet, so I think we had little choice in many places,” he explains.

The wet autumn and winter saw a 34% increase in annual rainfall in the East & North Eastern region, where Mr Poskitt farms, leading to much of the wheat drilling being abandoned and growers forced to choose between sowing spring crops or fallowing instead.

On his farm in East Yorkshire, an area that suffered as badly as any in the wet weather, Mr Poskitt says the season threw up some new challenges. Yet being bold in his decision-making has paid off.

“Harvest has been OK – much better than expected. It was never going to be a bumper harvest, but the important thing is that I’ve got my farm ready for the coming seasons.

“I’m 100% convinced I’ve done the right thing because in the places where I mauled crops in, they’ve done very poorly.”

Mr Poskitt believes the farm is now in the best shape possible given the tumultuous weather and hopes to get back on track soon.

The fallowed land was not the only decision Mr Poskitt had to mull over. The difficulty of sowing autumn crops meant a much larger area of spring cropping was sown on his farm too.

“We were 200ha down on the planned winter wheat area and we ripped up around 80ha of oilseed rape, redrilling it with spring beans.”

These have impressed where they were sown into good conditions; however, on the wetter land the beans have struggled, vindicating his decision to opt for fallowing over spring cropping in certain areas.

“The last field we sowed we had to pull out before completing the job. So we made the right decision, stopping and fallowing the rest.”

Mr Poskitt said it was still a huge decision despite looking like the only choice he had in some cases.

He believes, despite never having had so much land left to fallow, he has managed it well enough to minimise the impact on the bottom line of his business.

Much of the fallowed land was summer ploughed, mole drained and semi worked down in a bid to repair the soil.

“I’ve managed to turn the land around in the summer and work it during non-peak periods to utilise staff in quieter periods, so it has not cost us much in overtime and we have managed to get it turned around for drilling and establishing crops this autumn,” he says

The idea of putting in a cover crop was something Mr Poskitt also considered as he looked at the best possible way to address the damage done by the weather. However, spring cropping offered a more attractive alternative on areas where drilling was possible.

“I decided against this in the end because anywhere we could travel, it made more sense to go with spring beans rather than put the same effort in to establishing a cover crop.”

In North Yorkshire, close to where Mr Poskitt is based, there has been a great deal of land left fallow, but he suggests some growers may be regretting not making the decision to leave more fallow.

“Some of the crops looked to be in very poor condition, yielded poorly, and getting the soils back into good condition for next year won’t be easy.

“The land we have fallowed has generally been cold wet land, these poorer soils on the farm always benefit from an early drilling.”

It was also tough to resist the temptation to opt for the more profitable option of first wheat, but looking further term ahead than the 2014 harvest was pivotal.

“If I put wheat in the ground now, next year I will be back to square one trying to get oilseed rape in. It has basically given us reasonable security for two years on the more challenging soils.

“We have already got some good looking, well-established winter rape crops on this land which will hopefully give us a reasonable crop in 2014 and a good entry for wheat being harvested in 2015,” he says.

“We will obviously be down on our profitability and have less grain in the shed this harvest, but we have saved on some costs by not having to spend as much on establishment. Those crops pushed in on marginal conditions will have at best, broken even.”

Mr Poskitt believes it won’t be until next harvest when growers will see signs of a financial recovery with combinable crops.

Farmers will be funding the establishment of a large area of combinable crops this autumn due to the favourable conditions, at a time when they have a reduced cash flow from a reduced harvest, says Mr Poskitt.

The pressure of maintaining supply contracts was also weighed up by Mr Poskitt, who is one of the biggest suppliers of carrots to a leading supermarket chain.

“We lost a lot of vegetables in the winter and had to buy some crops in from overseas to fulfill contracts. We have also altered the specification for a lot of our customers who have been very understanding.

“We have certainly had to be a bit cleverer in what we do. They [vegetable crops] look fairly good at the minute, but it doesn’t look as if we will get huge yields,” he explains.

The tough season has offered a silver lining to the grassweed population on his farm. Suffering from some blackgrass hot spots, Mr Poskitt has been able to target those areas worst affected with glyphosate.

“We have not ploughed it for years, so it is a great opportunity to break the cycle of blackgrass and get on top of the situation.”

It is analysing every aspect that has given Mr Poskitt the confidence to know he has made the right decision.

“Long term, I think we will see the benefits, but short term we may see a fall in cash flow.

“I would say it has definitely paid off. Hopefully, we will get a better crop next year because of the difficult decisions made. It’s a great old saying but the first loss is the last loss.”

How farmers must adapt to variable conditions