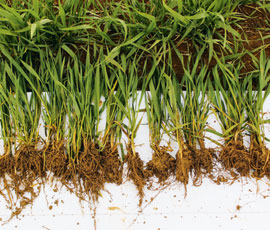 Compost tea can improve wheat yields by more than one tonne a hectare according to one south Lincolnshire grower.

Justin Stafford is in his fifth year of using liquid compost on a 1.8ha trial plot and has seen wheat yields increase between 0.75t/ha and 1t/ha as a result.

Pioneered in the USA, compost tea has been widely used in horticulture and landscaping but is yet to be adopted widely in the UK.

Mr Stafford is adamant the product, which derives its name from the tea-like liquid it forms, does work and is now looking to implement it across a much larger scale.

“It’s definitely working, it’s just at the minute working out the logistics of applying it in a big enough quantity.

“It’s been a big learning process, particularly in the first year. It’s not like nitrogen where you put it on the field and see instant results,” he adds.

This year he saw linseed yields increase by 77%, pushing up the farm average to 2.4t/ha from 1.4t/ha at Duncombes Farm, Little Bytham, about six miles west of Bourne.

Mr Stafford has seen a rise in yields across all crops in the trials, with oilseed rape seeing a rise of about 0.75t/ha.

He says costs are low, with half a tonne of compost costing £40 undelivered. The biggest outlay comes with buying the brewing equipment which can cost up to £7,000 for a 2,000-litre system.

How to use it

Mr Stafford makes the product in a smaller system by “brewing” a limited volume of good quality PAS100 compost with a catalyst in aerated water for 24 hours.

This achieves rapid multiplication of micro-organisms in the compost and produces a solution that can then be applied via a conventional sprayer after allowing the liquid to settle to avoid sediment from the compost causing blockages.

“I’ve been continually learning since I’ve been using it but it was just a simple case of leaving it to rest for 20 minutes once it has been made to allow everything to reach the bottom,” he says.

The group’s owner Gavin Lishman says it could play a big role in the future.

“We’ve seen some remarkable results on Justin’s farm which is testament because he has got on some challenging land,” Dr Lishman says.

In year two, Mr Stafford had a net gain in income of £145/ha as he increased yields by 25% and his input costs per tonne were identical because he cut his fertiliser use when using compost tea.

According to Dr Lishman, raising the volume of beneficial microorganisms helps plants make better use of the nutrients in the soil and also those applied to them.

In general, there are six to seven applications of the compost tea throughout the season, according to Mr Stafford.

“Normally in the autumn we apply double the standard 250l/ha. This is done at a ratio of 3:1 water to tea and applied just as the plants are coming up and you can see the tramlines,” Mr Stafford says.

“We then normally won’t touch it again till next spring when it starts growing vigorously and then we will go about every two weeks until it stops growing,” he adds.

It took about two years before any benefits were seen, but after that Mr Stafford has seen continual improvements.

Across a range of heavy clays to light brashy soils, Mr Stafford says the workability of his soils has improved with tests showing around 20% greater levels of both bacteria and fungi.

“I am sure the increased root growth in treated crops helped them survive the hard conditions of the 2013 winter, while our treated wheat and oilseed rape also fared better during recent droughts,” he adds.

Mr Stafford now plans to increase the use of the product and will apply it across his entire 56ha farm.

He also plans to install a larger 2,000-litre brewer, to complement his existing smaller one, to ensure he can produce enough of the product to treat the whole farm in a day.

How to protect your OSR crop from autumn diseases