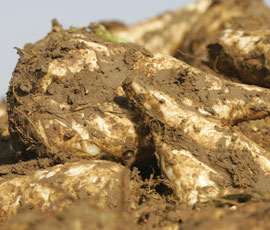 More than 350 growers attended an NFU meeting after rejecting a British Sugar price offer for the 2014 sugar beet crop.

Farmers have rejected British Sugar’s proposal to pay £30.67/t for the 2014 crop, saying it is not enough to keep them growing beet.

The offer is a supplementary £3/t over and above the agreed mechanism price for 2014, which would be £27.67/t, says the processing giant.

But growers say the offer fails to reflect the risks of growing beet. Farmers have faced challenging conditions in two of the past three beet growing seasons.

NFU sugar board chairman William Martin said the number of growers attending the meeting had shown their “clearest possible support” for the union’s negotiating stance.

Mr Martin said growers have reassessed the premium sugar beet needed to earn relative to other crops to continue to make it attractive in the rotation.

Following their experience of the past few seasons, growers felt there needed to be more of a safety margin than British Sugar was offering.

There were more risks associated with growing sugar beet – including late campaigns, soil damage and the effect on following crops.

“We are sick of being at the bottom of the [European beet price] table” said Mr Martin.

“We have listened to concerns regarding campaign length, factory reliability and price,” he said.

“Clearly we are disappointed that we haven’t reached an agreement around the proposal, but appreciate that the NFU are in a unique negotiating position, representing a wide range of views from 3,500 growers.