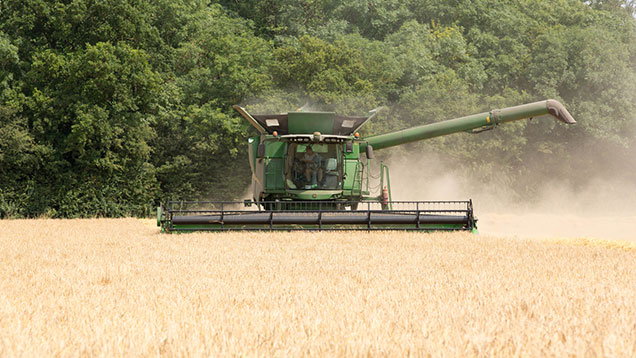 A total of £357,000 has been paid back to winter barley growers from Syngenta, as part of its yield guarantee, with 75% of the eligible area receiving the cash.

Farmers had been guaranteed a payback if the Syngenta regional reference site closest to the grower’s farm did not record a 0.5t/ha yield advantage from Hyvido hybrid barley over conventional varieties.

About 30% of the Hyvido crop drilled last autumn was registered for the guarantee, a figure which looks set to be surpassed this year.

“You are sometimes sceptical over whether these things will pay out, but certainly last season, it paid off for us.” Charlie Stewart, farm manager

Farm manager Charlie Stewart enjoyed double success with his winter barley last season, as he received £13,000 back and the second highest barley yield he’s ever had.

“We are absolutely delighted with the result and it’s proved worthwhile, boosting the performance of our winter barley quite substantially,” he says.

In total 217ha of Hyvido winter barley was grown last year. Based on medium loam soils, Mr Stewart says hybrid barley has provided him with a consistent performer in recent years, offering an early entry in oilseed rape.

A £60/ha refund on Syngenta’s Hyvido hybrid barley varieties if:

Farmers must have grown Hyvido under the following conditions:

“It is not the most profitable crop but it helps us reach our aim of maximising our first-wheat area,” he says.

With 345ha of barley in the ground this year he has entered the guarantee again saying he has nothing to lose and cites the success of last year’s campaign.

“You are sometimes sceptical over whether these things will pay out, but certainly last season, it paid off for us,” he explains.

Syngenta campaign manager Mark Britton says following a full year of the scheme, including paying growers back, he considered it a success.

“The pay out is slightly higher than anticipated and I think that is due to the exceptional year we had,” he explains.

According to Mr Britton, everyone who was eligible to submit a claim was contacted, but not everyone submitted a claim, which is thought to be due to a combination of factors, such as not following the correct protocol.

He says it has shown there is a genuine guarantee for growers, which has allowed them to build a degree of risk management on their farm.

“It demonstrates the benefits of hybrid and gives confidence and reassurance to try hybrid barley, knowing that if doesn’t perform on their local reference farms they will get money back,” he says.

The average yield advantage of Syngenta’s Hyvido hybrid barley versus conventional varieties across all sites was 0.59t/ha.

Hyvido out yielded conventional variety at more than 90% of the sites and on 60% it delivered on the 0.5t/ha promise above the conventional.

“There will be quite a few growers who will have achieved good yields with Hyvido barley but will still get the pay out, getting a double benefit,” he says.

To ensure their eligibility, growers were required to follow a specific protocol set out by the chemical company.

Growers have until the end of the month to register for this season through Syngenta’s website.

Once growers have entered their details on the website they are reminded to click on the validation link to ensure they are fully registered.